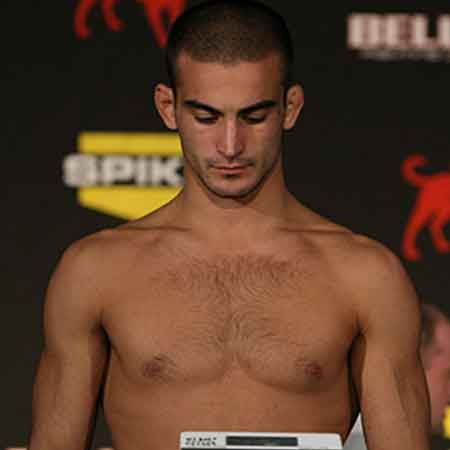 Andrey often posts pictures of himself with his beautiful wife and child captioning my family. However, the name of his partner and child is still unknown in the media.

Andrey Andreevich Koreshkov was born on 23rd August 1990, in Omsk, Russian SFSR, to Russian Parents. Regarding his nationality, he is Russian and is of mixed descent.

Andrey Koreshkov made his professional mixed martial art debut in October 2010 while he was at the age of 20. In the beginning, he competed exclusively in his native country where he compiled an undefeated record of 8 wins with no loss.

Right after that, the MMA news site called, Bloody Elbow listed his name at the top of the welterweight prospect in the 2012 MMA scouting report.

In the same year, Koreshkov made his United States debut for Bellator. His first fight was against Taiwan Howard at Bellator LXIII which he won via KO in the first round.

Till the present context, he has faced numbers of mixed martial artists including Fernando Gonzalez, Douglas Lima, Adam McDonough, Sam Oropeza and so on. Besides, he has set the MMA record of 20 wins out of 22 games, 11 by knockouts, 3 by submission and 6 by decisions.

When it’s about personal life, the mixed martial artist, Andrey Koreshkov has kept it very low profile. He has not shared much information regarding his family and relationships. But scrolling down his Instagram accounts, he seems to be a married man.

Andrey often posts pictures of himself with a beautiful woman and child captioning my family. However, the name of his partner and child is still unknown in the media.

Apart from being a renowned mixed martial artist, Koreshkov also seems like a decent father. He often gives time to his family and also visits different events together.

Till the present context, there are no any rumors or news of Koreshkov having affairs with another woman.  Besides, he seems to concentrate on his career.

As an established mixed martial artist, Andrey Koreshkov has accumulated a good amount of money in his career. He has won several fights through which he receives a good sum of money as the bout money.

Moreover, he also receives a decent amount of money from several brands as an endorsement. Allocating information from several sources as of 2018, it is found out that Andrey current estimated net worth is around $500 thousand.