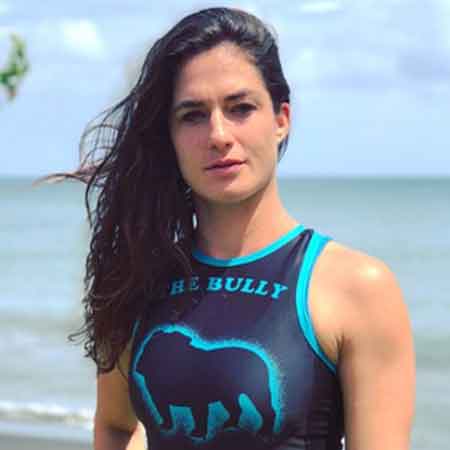 Mayo is currently in a relationship with Nick Pica.

Brooke Mayo was born on 10th August 1992, in Pleasanton, California, United States. She belongs to an American nationality and holds white ethnicity. However, Mayo hasn’t revealed any information about her parents.

Mayo grew up along with her younger brother, Harrison Mayo. Moreover, her education background is also still unknown.

During her amateur career, Brooke Mayo made a total record of five wins and 1 loss. She began her amateur career in 2015 competing at  WFC 14 – Berkovic vs. Bailey. On 30th May 2015, Mayo defeated Brieta Carpenter via unanimous decision on her debut fight. After that, she defeated Antoinette Bernal by knockout in her second fight on 18th July 2015.

Her winning streak continued as she defeated Mayra Mello Mazza at  GetDown Promotions – GetDown Fights 22: 1st Female California State Championships on 2nd July 2016. Mayo made her Bellator debut on 18th February 2017, at  Bellator 172 but lost the fight against Veta Arteaga via TKO. Moreover, Mayo lost her second fight against Kaytlin Neil at Bellator 183.

One of the prominent MMA fighters, Brooke Mayo is not married yet. However, Mayo is currently in a relationship with boyfriend, Nick Pica who is also an MMA fighter. Mayo and Nick are dating since long and are still together.

They are seen hanging out together and further make a public appearance together. Likewise, they also share pictures on their Instagram. Although the couple is dating, none of them have said any plans of getting engaged or married. Besides this, Mayo hasn’t been in any relationships before.

Brooke Mayo is living a lavish life. Her main source of income is through her MMA career. She earns a good sum of money from her MMA career. Allocating information from several soruces as of 2018, it is found out that Mayo current estimated net worth is around $1 million and her current salary is $11,000.

She owns two bulldogs worth $1200-$3500. Likewise, during her vacations, she often visits new places with her friends, family, and boyfriend.