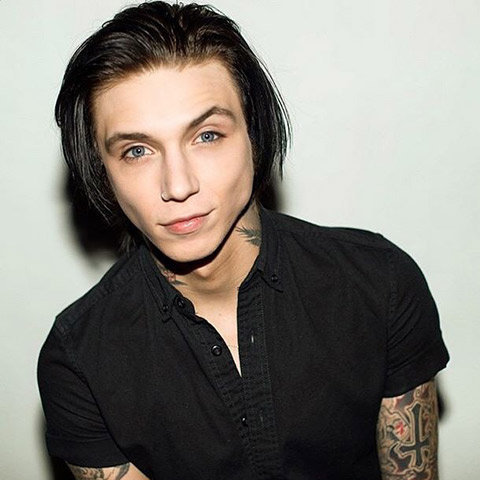 Andy Biersack, an American singer, was born on December 26, 1990. He is best known by his another name Andy Six. He is also the songwriter and pianist. He is the lead singer of the American rock band Black Veil Brides which was founded by him. He has composed many songs for his band which has been quite hit. Andy is only the original member that is remaining in it until date.

He has also appeared in the movie which makes him an actor too. He is quite a multi-talented person. His birth name was Andrew Dennis Biersack. He is also known as Andy Back and The Prophet. Andy was born in Cincinnati, Ohio, United States of America. His genre of music is glam metal, heavy metal, hard rock, punk rock, and metalcore. He is one of the most famous rock artists and has also been listed as one of the top living rock stars in 2011.

Talking about his early life and career, for the study Andy went to a Catholic Elementary School. He has mentioned about it in many of his interviews. He has also revealed that his preschool teacher Jamie Peters was one of his biggest influences of his creativity. Andy has been one of the targets of bullies of school because of his way of dressing and for the music he used to listen. Later he went to Cincinnati’s School for Creative and Performing Arts for his high school study. From there he completed major in drama and vocal music. At the age of 18, Andy moved to Los Angeles to pursue his dream of becoming a singer before completing his graduation. He formed his first band called “Biersack” with few of his friends. At that time, he was only 14 years old. Later the band was renowned as “Black Veil Brides”. The band was signed by the independent label StandBy Records in September 2009. In the same year, the band released their first music video for their song “Knives and Pens”. The music video was quite popular and had more than 200 million views on YouTube.

On July 20, 2010, Black Veil Brides first debut album was released. The album was titled “We Stitch These Wounds” and sold over 13000 copies in its first week of release. The album was ranked number 36 in the Billboard Top 200 Chart and number 1 spot on the Billboard Independent chart. On June 14, 2011, they released their second studio album called “Set the World on Fire.” The album was released on Lava Music/Universal Republic Records. The album was also quite successful and ranked top in the different music charts. After that they released their third album “Wretched and Divine: The Story of the Wild Ones” on January 8, 2013, and on October 27, 2014, the band released their fourth album. Despite being the band member, he has also worked on the band as Andy Black. He revealed that he was working on a solo project and on May 19, 2014, he released first song “They Don’t Need to Understand” with a music video. He has also revealed that he will be releasing his first solo album on May 6, 2016.

Talking about his personal life, he has kept it very low profile and secret. It has been heard that he was married to a woman named Juliet but there is no any confirmed news about it. Rumor has also been heard that Savannah Biersack is his daughter about whom he also isn’t aware because Juliet had never mentioned him about it. Since it’s a rumor, we cannot be sure about the news until Andy speaks out. According to the sources, his net worth is estimated to be more than 2.5 million dollars (2016). Being one of the hot celebrity, he has millions of fans and followers on his social networking sites profiles. He is quite active on his social sites accounts like Facebook, Instagram, and Twitter.