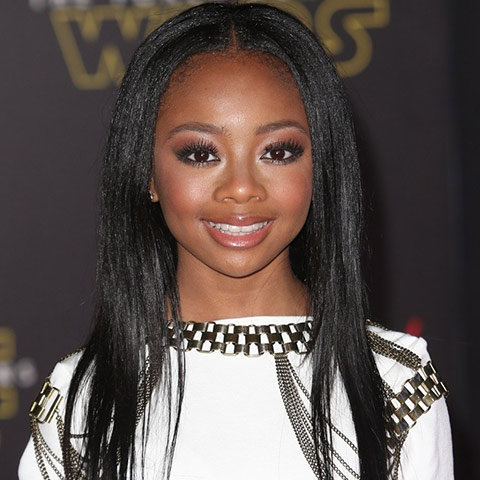 Born on April 8, 2002, Skai Jackson introduces herself as an American actress who is best known for her role in Disney Channel comedy Jessie, where she played the role of Zuri Ross. She is currently appearing in the Disney channel series Bunk’d.

Jackson was born in New York and started her career in acting as a child model. She made numerous appearances in national commercials such as Band-Aid bandages. She debuted her major role in independent film Liberty Kid (2007) and her acting received wide appreciation. With her impressive performance in debut independent film, she was signed for another film Rescue Me in 2008. In Rescue Me also she showed her strong presence. In 2009, she appeared in the film The Rebound and on the same year she was cast member of the animated series Bubble Guppies, where she played the role of Little Fish.

In between 2010 and 2011, she appeared in the guest role in the television series Team Umizoomi, Boardwalk Empire and Royal Pains. She also played small roles in the films Arthur and The Smurfs in 2011. At the early age, she has been able to gain name and fame as an actress and has been considered as the rising star in Hollywood. From this child prodigy, Hollywood can expect a lot more in upcoming future. Day by day, she is coming up with flourished acting and high level of confidence. In 2011, she appeared on the role of Zuri Ross in the sitcom Jessie produced by the Disney Channel. Similarly, she appeared in the guest role in an episode of animated series Ultimate Spider-Man produced by Disney Channel and in 2015, a new Disney Channel series Bunk’d was announced and Jackson was taken again for her role of Zuri Ross.

At this early age, she has an unbelievable number of fans followings on her social networking sites. She has nearly one million likes on her facebook page and has 2.2 million followers on Instagram and 131K followers on twitter. Jackson stands tall with a height of 132 cm. As a child actress, she has earned net worth of $500 thousand at this early age.