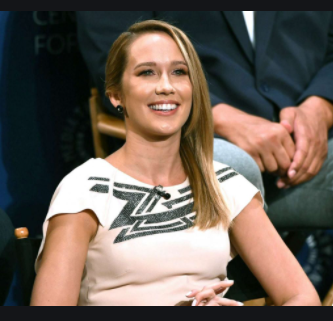 Anna Camp is an American actress and singer widely known for her roles in movies including Pitch Perfect and True Blood. Her other popular roles are in Mad Men, The Good Wife and in the sequel of the musical comedy film, Pitch Perfect.

Camp has appeared in many music videos including “Marry Me” and “Crazy Youngsters.” She has won MTV Movie Awards and Satellite Awards and has further been nominated for several other awards. Anna was previously married to Michael Mosley. Well, she is currently married to husband Skylar Astin. Scroll down to know in details about Camp’s early life, education, career, awards, net worth, earnings, salary, properties, family, marriage, children, and divorce.

Anna Camp was born on September 27, 1982, in Aiken, South Carolina, United States. Her father Thomas Sewell Camp is a bank executive and mother Dee Camp a Democratic Party volunteer. Camp spent her childhood in Columbia, South Carolina along with her elder sister, Saluda Camp who is also an actress.

Camp attended Meadowfield Elementary School and in her second grade, she was cast in a Drug Abuse Resistance Education production. In 2004, she graduated with a Bachelor of Fine Arts degree from the University of North Carolina School of the Arts and then moved to New York City.

Shortly after her graduation, Anna Camp moved to New York City. In 2005, Camp appeared in Columbinus where he portrayed the role of Perfect. For her performance in the Off-Broadway play, The Scene Camp was nominated for Lucille Lortel Award. She made her big screen acting debut in 2007 through the movie And Then Came Love.

Likewise, Camp further appeared in ABC television series, Reinventing the Wheelers as Meg Wheeler. After that, she starred in television series including Cashmere Mafia, The Office, and Glee. From 2008, Camp portrayed the role of Sarah Newlin in the regular series True Blood until 2014 for which she won Satellite Awards and got nominated for Screen Actor Guild Awards.

Furthermore, Camp has earned further recognization for portraying the role of Aubrey Posen in 2012 movie Pitch Perfect and its sequel. For her role, she was able to win an MTV Movie Awards in 2013 and further got nominated for the same award in the same year.

The renowned and gorgeous actress, Anna Camp is married twice in her life. Camp was previously married to an American actor, Michael Mosley. The couple engaged in September 2008 and after two years they tied the knot on January 29, 2010.

But the things didn’t go well in between the couple so, after three years of their marriage, they filed for a divorce in 2013. However, none of them has said anything about the reason behind their separation.

Later, Camp began dating Pitch Perfect co-star, Skylar Astin in 2013. After dating for three years, the couple decided to take their relationship to the next level and finally engaged in January 2016. Well, after few months of their engagement, the couple tied the knot on September 10, 2016.

One of the versatile actresses, Anna Camp is living a lavish life. She has starred in numerous movies and television series till date. From her acting career, Camp has earned an astonishing amount of money. Moreover, she further adds money from her singing career.

The house is filled with drought-tolerant gardens, trees, and sculptural fountains. It occupies 3,200 square feet and features four bedrooms and four bathrooms along with a garage and yoga studio. Furthermore, she also owns a dog.