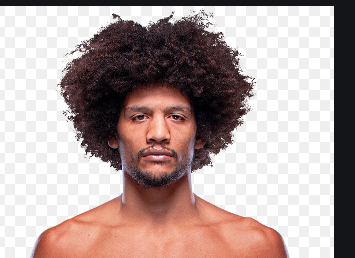 Alex Caceres is an American mixed martial artist who currently competes in the featherweight of the Ultimate Fighting Championship. Previously, he fought at the Ultimate Fighter. The talented fighter is also known by the name of Bruce Leroy.

Talking about this talented fighter’s personal life, Caceres has kept it under a very low profile. However, analyzing his Instagram account, he is seen with a beautiful girl whose name is still unknown to the public.

Alex Caceres was born on 10th June 1988, in Miami, Florida, to American Parents. He has two siblings whose names are unrevealed till date. Regarding his nationality, he is American and is of mixed descent.

The 5 feet 8 inch tall, Alex Caceres began his fighting training at the Young Tigers Foundation. Initially, he fought in the underground backyard street fighting organization, mostly in Florida based promotion. During that time, he faced Eric Kovarik, Joel Garcia, and Jahmal McLennan.

Afterward, Caceres signed with the Ultimate Fighting Championship and appeared on the Ultimate Fighter: Team GSP vs Team Koscheck. He made UFC debut in March 2011 fighting against Mackens Semerzier at UFC Fight Night.

However, he lost fight via submission in the first round. Subsequently, Caceres then faced numbers of Mixed Martial Artists including, Roland Delorme, Mitch Gagnon, Sergio Pettis, Urijah Faber and so on.

More recently, Alex Caceres was scheduled to face fighter, Artem Lobov but both fighters were pulled out from the UFC 223 as Lobov took part in on Khabib Nurmagomedov’s bus at the Barclays Center.

When it’s about the personal life, Alex Caceres has kept himself away from the limelight. However, analyzing his Instagram account he seems to be in the relationship as he often posts photos of himself with a beautiful girl whose name is still unknown to the media. Her official Instagram account is @yah_sweetheart.

However, none of them have announced about their relationship to the public due to which it has made hard that whether the couple is in the relationship or not. Currently, they might be concentrating on their career rather than being headline news due to their personal life. They might soon announce their relationship.

The young and rising fighter, Alex Caceres earns a decent sum of money from his fighting career. Till the date, he has fought almost 25 games out of which, he has won 13 games, three by Knockout, 5 by submission and 5 by decision.

Allocating information from several sources as of 2018, it is found out that Alex Caceres current estimated net worth is around a million dollars. As per his fighting appearances, he appears to be making money in thousands of dollars.