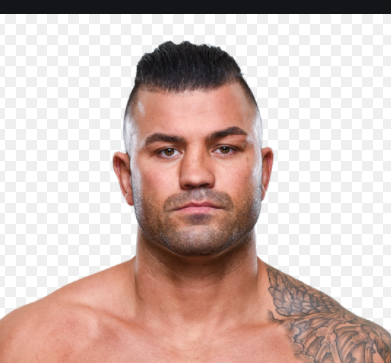 Steve Bosse is a Canadian professional boxer who currently competes in the Heavyweight Division. Prior to that, he competed as a mixed martial artist in the Lightweight Divison of the Ultimate Fighting Championship. Besides, he was also a hockey enforcer “The Boss”  in the Quebec semi-professional league Ligue Nord-Americaine de Hockey.

Bosse has kept his personal life away from the limelight. However, checking his social networking sites like Instagram and Twitter, he seems like a married man as he often posts pictures of himself with a baby son and his beautiful wife.

Steve Bosse was born on 29th June 1981, in Quebec, Canada to Canadian Parents. As a child, he started playing hockey and aimed to be a professional in that sport. Besides, he used to train boxing in order to improve his skills on the ice.

He played as a hockey enforcer in the Quebec semi-professional league of Ligue Nord Americaine de Hockey. However, he later left playing hockey and began training mixed martial arts along with Mark Colangelo.

The Canadian boxer, Bosse joined MMA in 2006 after he met the agent Stephane Patry who gave him an opportunity to fight. He had his first fight in 2007 at the Montreal Bell Centre against David Fraser.

The following year, he then fought at the Strike Box/Titans Fighting and subsequently joined Ultimate Fighting Championship where he faced several mixed martial artists including, Thiago Santos, James Te-Huna, Sean O’Connell and so on.

After fighting almost three years at the UFC, Bosse then made his professional boxing debut. More recently, he fought with Julio Conceali Cuellar Cabrera where he won the fight via KO in the second round. Till date, he has set the MMA record of 12 wins out of 14 games.

The multi-talented 36 years old personality, Steve Bosse is quiet about his personal life. He has not shared much information about his love life. However, analyzing his Instagram accounts, he is a married man.

He often posts pictures of himself with his wife whose name is still unknown to the public. Besides, the couple has recently welcomed their baby son. It was known after, Bosse posted his baby son’s pictures on his Instagram account.

Moreover, the couple seems to have a strong bond together. As of now, both of them have kept themselves away from the love affairs and no any rumors are there in the media.

Steve Bosse earns a great sum of money from his Multiple professions. Besides, he has also accumulated a good money from his Ice-hockey and MMA career.

Steve Bosse earns a good sum of money in his career. Allocating information from several sources as of 2018, it is found out that his estimated net worth is around a million. But seeing his works, he appears to be making money in thousands of dollars from several fashion lines and brands.