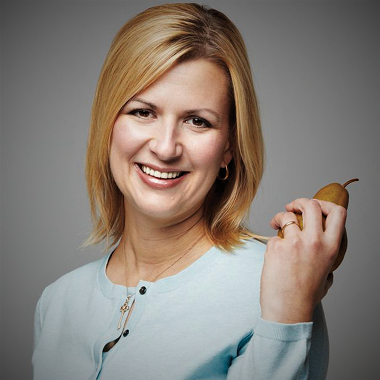 Anna Olson is an American-Canadian renowned Pastry Chef, who creates delicious recipes and invites viewers to the country home kitchen. She also advertised her baking style by sharing valuable cooking tips on the television show. She is also well known as a Violinist.

As of 2019, Anna Olson has a net worth of $8 million. She is married to Michael Olson who is also chef and co-author of a cookbook. The couple resides in Welland in the Niagara region of Ontario, Canada.

Allocating information from several sources as of 2019, it is found out that Anna Olson current estimated net worth is around $8 million.

You don’t want to miss: Claire Saffitz, a professional chef, food critic and a popular senior food editor at Bon-Appetit!

Moreover, She also receives a good sum of money from several ventures as an endorsement from Starbucks Coffee, Splenda, KitchenAid, Pillsbury, Bulk Barn, and Home Hardware.

The 51 years old, Anna is married to Michael Olson who is also chef and co-author of a cookbook. The couple resides in Welland in the Niagara region of Ontario, Canada.

The duo married each other in 1999 which is 20 years before from now. They both work as a pastry chef and met each other at Inn on the Twenty in Ontario.

Anna and Michael don’t have any children of their own but Anna is looking after an adopted daughter from her husband previous marriage. The couple is living happily together and there is no sign and rumors of divorce till date.

Anna Tomcik( Olson) was born on 4th May 1968, in Atlanta, Georgia, U.S. She shifted to Toronto in her young age with her parents, Donna and Andy Tomcik. Her grandparents were from Slovakia.

Anna enrolled at Queen’s University and earned a degree in political studies and sociology.  She also attended College of Culinary Arts at Johnson and Wales University in Denver, Colorado. She was always interested in making food with different ingredients so that she could enjoy her every dinner as a party.

Anna Olson began her career as a pastry chef after seven years at “Inn on the Twenty” in Jordan, Ontario. It was during this time, she met her love of life, Michael Olson, who is also a chef.

Adding more, she was featured on “Starbucks Coffee” in Canada in the different promotion. Anna’s brown sugar pound cake was nationally promoted in an advertisement of “Food Network” Canada.

In 2000, Anna published her writings”The Inn On The Twenty Cookbook,” which was co-authored by her husband, Michael Olson. She published a cookbook named, “Sugar” in 2004.

In 2005, she released a book with an association with her husband, named “Anna and Michael Olson Cook At Home: Recipes For Every day and Every Occasion.” She has also contributed in writings for the book ‘Vines‘  and ‘LCBO Food and Drink.’