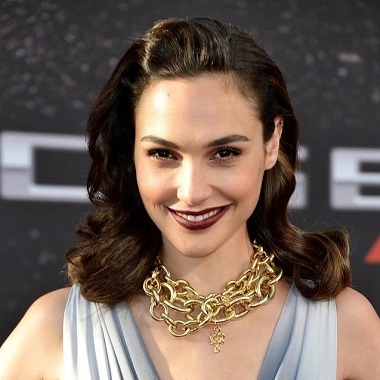 Chinese-American Film Festival award winner Israeli actress and model, Gal Gadot is widely recognized for her role as Gisele Yashar in the film “The Fast and the Furious.” Portraying Wonder Woman in the DC, she appeared in Batman v Superman: Dawn of Justice and featured in superhero film Wonder Woman.

Having active in the entrainment industry since 2004, she has appeared in several Films and TV series and ranked as one of the highest earning models in Israel. She is also the face of Gucci’s Bamboo perfume.

Gal Gadot is a happily married woman. She and her husband Yaron have been married since 28th September 2008. Her husband is an Israeli real estate developer.

Gal Gadot-Varsano was born on 30th April 1985 in Rosh HaAyin, Israel. Her mother, Irit Gadot is a school teacher whereas her father, Michael Gadot is an engineer, born in Israel. The family Hebraized their surname from “Greenstein” to “Godot.” Her maternal grandparents were Holocaust survivors. Gadot’s ancestry is from Austrian-Jewish, German-Jewish, Czech-Jewish, and Polish-Jewish.

Gadot was always an enthusiastic child, playing several sports and studying dance in her youth. One of her earliest career goals was to be a choreographer; she told Vanity Fair. Gadot, who has a regular height used to play basketball in her high school days.

Soon after she completed high school, she went on to study law at the Reichman Law School, and the Interdisciplinary Center Herzliya.

In 2004, Gadot participated in Miss Israel competition at the age of 18 and won the title. At the same year, she competed in the 2004 Miss Universe pageant in Ecuador, but unfortunately, she could not hold the title.

Later, Gadot became part of the Israeli Army as a citizen of Israel. She completed her two years of mandatory military service. There, she exceeded in an exhausting three-month boot camp that provided her to serve as a combat trainer.

Gadot was once criticized for being “Zionist,” on Twitter, in reaction to her military service. She says of her time in the army: “You give two or three years, and it’s not about you. You give your freedom away for a while. You learn discipline and respect. The things I’ve been through as a soldier fixed me to deal with career things as well.”

At the age of 21, Gadot became a member of the Maxim photo shoot “Women of the Israeli Army,” in 2007 and as a result, she featured on the cover of the New York Post. Gadot has led international campaigns for Gucci fragrances, Vine Vera skin care ranges, advertised Jaguar Cars and Captain Morgan rum. She is also the face of Gucci’s Bamboo perfume brand, Huawei smartphones, and Miss Sixty.

She starred as the cover girl on Glamour, Bride Magazine, Entertainment Weekly, UMM, Cleo, Fashion, Lucie, FHM, Cosmopolitan. From 2008 – 2016, Gadot was also a leading model for fashion brand Castro, which made her annual salary at NIS 2.4 million.

In 2012, Shalom Life Number 5 named her on the list of “50 most intelligent, funny, talented and beautiful Jewish women in the world,” behind Bar Refaeli, model, and Eva Green, actress. Likewise, she was listed as an upcoming leading lady by InStyle magazine in 2014.

Gadot began acting in the Israeli drama “Bubot“ in 2007, where she played Miriam “Merry” Elkayam. In 2009, she starred as Gisele in the fourth franchise of “Fast & Furious.” the fourth film in “The Fast & the Furious franchise.” Her performance in the film won her the Chinese American Film Festival awards in the category of Most Popular US Actress in China.

In 2011, Gadot reprised her role in the fifth The Fast & the Furious franchise, Fast Five. In 2013, Gadot appeared again as Gisele in “Fast & Furious 6″. Before this, she had a minor role in the action-adventure “Knight and Day” in 2010.

In 2016, Gadot played Wonder Woman in the superhero film “Batman v Superman: Dawn of Justice.”  The film is the second installment in the DC Extended Universe following 2013‘s Man of Steel. She was nominated for Teen Choice Awards and Women Film Critics Circle Awards and Critics’ Choice Awards for her role as Wonder Woman.

Gadot will be playing Diana “Wonder Woman” in the upcoming most awaited American superhero film “Wonder Woman,” where she played as a warrior princess of the Amazons, daughter of Hippolyta and immortal warrior. Gadot represented her character as having “many forces and powers, but at the end of the day she’s a woman with a lot of sensitive minds.”

The film is directed by Patty Jenkins and produced by Richard Suckle along with Charles Roven, Zack Snyder, and Deborah Snyder. Wonder Woman is prepared to be released on 2nd June 2017, in 2D, 3D, and IMAX 3D.

She will also reprise Wonder Woman in “Justice League,” where she will be playing an antiquities dealer and acquaintance of Wayne who is a 5,000-year-old eternal Amazonian fighter princess, daughter of Zeus, who possesses superhuman attributes and abilities inherited from her parents. The film is scheduled to be declared on 17th November 2017, in 2D, 3D and IMAX 3D.

Gadot is a happily married woman. She and Yaron Havesano have been married since 28th September 2008. Her husband, Yaron Varsano is an Israeli real estate developer. At 26, she gave birth to her 1st child, a daughter named Alma Versano in November 2011.

In 2016, Gadot was appointed as an Honorary Ambassador for the Empowerment of Women & Girls by the United Nations. Subsequently, Gadot was called to give a speech at the UN in New York City. Gadot is a motorcycle biker and owns a black 2006 ‘Ducati Monster-S2R’.

She is one of the successful actresses and earns an attractive salary from her career, and her salary mostly hails from her acting, modeling and brand endorsements. Allocating information from several sources as of 2018 it is found out that Gal Gadot current estimated net worth is around $10 million.

Gal has a seductive body measurement of 32-34-34 inches. The 5′ 9″ actress holds an Israeli nationality and belongs to Ashkenazi Jewish ethnicity.