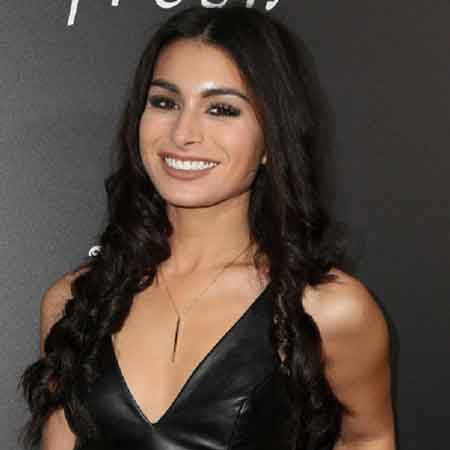 The American reality Tv show star, Ashley Iaconetti is famous for appearing in the Bachelor and Bachelor in Paradise series. She is a talented person who has worked in media and journalism for a long time. Iaconetti has also worked as a freelance writer and sports reporter.

Ashley Ianconetti was born on 6th of March 1988 in Great Falls, Virginia. She is the daughter of Dr. Jay Iaconetti who is an anesthesiologist at Inova Fairfax Hospital. She also has a sister named Lauren Iaconetti who also appeared in Bachelor in Paradise. Regarding her nationality, she is American. Iaconetti is of Italian descent.

As for education, Iaconetti attended Langley High School in Northern Virginia. She then graduated from James Madison University for Media Arts and Design. She completed her Master’s degree in Broadcasting and Digital Journalism from Syracuse University.

Iaconetti was a nanny before she completed her education. She then became a sports reporter and freelance writer. Her big break, however, came when she was chosen to be a contestant in season 19 of ABC’s hit reality television show ‘The Bachelor’ competing to win over Chris Soules.

The Tv personality got famous for excessive crying and her over emotional demeanor in the show. However, Ianocetti only lasted for four weeks and was eliminated in week five. She was able to leave a lasting impression on the audience and was brought back for season 2 and 3 of Bachelor in Paradise. Furthermore, Iaconetti appeared in spin-off talk show Lone ranger in Paradise: After Paradise’and the Bachelor Winter Game.

YouTube: Ashley I Cry Count in Bachelor in Paradise;

Apart from her Tv appearances, Iaconetti has worked as a correspondent for Jets Insider, Clevver Tv, and Access Hollywood. She also has a blog where she put out her thoughts on the Bachelors series.

The Tv personality has also worked as freelance writer for Cosmopolitan. She is also the CEO and owner of E&S Media Creations that provide video services. Aside, she also has a podcast along with fellow Bachelor member Ben Higgins called Almost Famous.

Iaconetti is not married yet. The 30-year-old is in a relationship with fellow Bachelor Alum named Jared Haibon. The two met on the sets of Bachelor in Paradise. After a long friendship and complicated relationship status, the two are finally dating. They share a wonderful bond and have been dating for some time now.

Prior to this, the Tv personality was dating Kevin Wednt whom she met on Bachelor Winter Game. They broke up in March 2018  because Iaconetti felt that their relationship had run its course.

Apart from that, Iaconetti was rumored to be dating Bachelor Alums Wells Adams, Ben Higgins, Dean Unglert.  Nevertheless, she is now in a happy relationship with Haibon.

Iaconetti earns a decent amount from her from her successful career. She has appeared on the Bachelor series many times. The show must pay her well. On the other hand, her company E&S Media Creations is also doing well. The company annually earns $110,000. Her net worth is estimated to be $500,000.

Aside, Iaconetti also has a huge Instagram following. She posts some sponsored content on her Instagram page. She has advertised products and services like Blue Apron, Olay, Dermalogica and many more. It must provide her good revenue.

The Tv personality is living a comfortable lifestyle. She is active in her career. So, her net worth is subjected to increase in coming days.