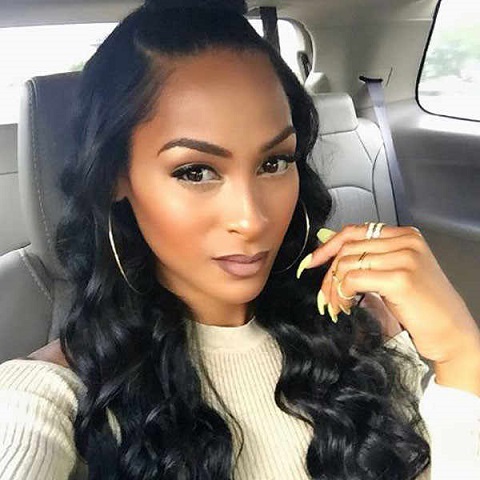 Ashley Nicole Roberts is an American reality television star, former Army Officer, and model, well known for featuring in the reality series “WAGS Miami”, a show which features a group of women who are romantically involved with professional sports stars.

As of 2019, Ashley Nicole Roberts has a net worth of $1 million. Further, she is a happily married woman. She got married to her long-term partner, Philip Wheeler, linebacker for Atlanta Falcons. The couple has been blessed with two beautiful sons; Deuce and Phox.

Allocating information from several sources as of 2019 it is found out that Ashley Nicole Roberts’ current estimated net worth is around $1 million. In addition, she earned an annual income of $47,000 from her modeling career.

On the other hand, her husband, Philip Wheeler has an estimated net worth of $14 million. So far, Wheeler has made earnings of $18,409,891 from his entire NFL career. As of now, the couple has an extra vagant lifestyle. They own a stunning house, in addition with several  luxury cars.

Wheeler used to go the club and made several attempts to talk to but she kept putting him down. However, Philip’s continuous efforts got her into a conversation which later turned out well both of the celebrity couples.

The couple was in a relationship for about seven years before getting married, and they together have two beautiful sons named; Deuce (b:2013) and Phox (b:2018). Despite being unmarried, the two had very strong bonding. They engaged in November 2016, where Wheeler proposed to her with a $100K pear-shaped diamond ring at the Villa Casa Casuarina.

Roberts was once caught in a heavily criticized controversy regarding an image she shared breastfeeding her son on Instagram but Wheeler strongly supported her.

Born as Ashley Nicole Roberts on 23rd November 1989, in Las Vegas, Nevada, USA, she relates to a family with a military background. Being related to a family with an army background, her younger years were mostly spent traveling and living overseas. Her star sign is Sagittarius.

She attended Tuskegee University and graduated with a degree in Animal Science and later followed her interest in veterinary medicine. Her mother’s name is Yvette Roberts.

Ashley Nicole Roberts has been the core of attention for several times in the past seven years of her relationship with Philip. However, she is also popular for modeling and other activities. In 2016, Ashley was chosen for WAGs Miami.

She came into the limelight after a big controversial fight with Darnell Nicole. Darnell was assumed to be going through some trauma because of her relationship, and this was the time when Ashley got engaged to Philip. This created some controversy between the two which was later settled.

Moreover, Ashley Nicole is linked with various modeling agencies. Ashley Nicole Roberts’s modeling career began when she joined FORD Models. Ashley had placed out to Chicago from Vegas to pursue a career in modeling. However, during her young days, she briefly worked as an Army Officer.

Currently, Roberts is still active in the modeling and cosmetics industry. For the information, she is the founder of a company called “Ashe hair Care.”

Besdies, she also has a YouYube channel named “Life & Laughs with Dee & Ash“, which have more than over 24k subscribers. Similarly her followers are 518k on Instagram, 13.1k on Twitter, and 4.45k on Facebook, respectively.