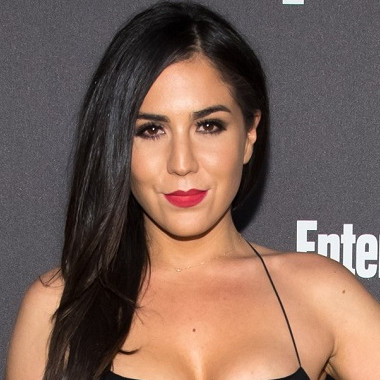 Audrey Esparza is a successful actress, known for her role as FBI agent Tasha Zapata, on the American TV series Blindspot. She has also appeared in Amateurs (2013) and Floating Sunflowers (2014).

Audrey Esparza is unmarried and possibly single according to her social accounts. However, some source claims that she is linked to her Blindspot co-star, Sullivan Stapleton.

Audrey Esparza was born on 5th March 1983-unverified in Laredo, Texas, United States. She is the daughter of Sandra and Felipe Esparza, a latino pediatric dentist and is the son of Jorge and Raquel (Uribe) Esparza.

Both Jorge and Raquel taught mathematics in the Laredo Independent School District for many years at Christen Jr. High and Martin High School.

Audrey completed her four years long training at the Tisch School of the Arts (TSA) at New York University. During her time at TSA, she was involved in the Experimental Theatre Wing. Esparza initially started acting on the stage and performed in a number of theater productions before she made her screen debut in 2011.

Growing up in Texas border city, Audrey didn’t have much access to theater but she was introduced to the world of theatre during her stay at NYU. Having spent four years at the Experimental Theater Wing, she absolutely loves reading screenplays, good, bad, old, new, or weird.

Esparza has been an extraordinary actress and she has been so perfect while choosing the roles. She has selected the role which suits her acting style. In 2011, she appeared in the movie called Family Practice and her work as Liz Stratton in that one won millions of hearts all over the world.

In 2013, she appeared in five TV show; she played Dana Montero in The Following (Episode: “Let Me Go”); Joyce Ramirez in The Americans (Episode: “Gregory”); Lucy Barrone in Golden Boy (Episode: “Scapegoat”); Jana Garza in Blue Bloods (Episode: “Protest Too Much”) and Carmen in Amateurs.

In 2014, she had a recurring role as Carlotta in The Black Box, appearing in 12 episodes. The same years, she also played Liliana in three episodes of Power. She also appeared on Public Morals as Theresa.

Esparza’s breakthrough role came in 2015 after she played the main character as Tasha Zapata, an FBI agent on Blindspot. Although Esparza is a newcomer to the primetime scene, she hit the ground running after she played Tasha, a hardworking FBI agent that doesn’t know how to balance her home and her work life.

As of 2017, Audrey Esparza, age 34, is unmarried and possibly single according to her social accounts. However, some source claims that she is linked to her Blindspot co-star, Sullivan Stapleton. She often posts a photo of him on Instagram. But the two denied the rumors and said that there is nothing cooking between them and are ‘just’ good friends but nothing more than that.

It seems that the up and coming star Esparza, do not have a boyfriend or relationships previously. Being focused on her career, it is clear that hasn’t married and also no any reports of her husband, but she isn’t a lesbian as well.

Audrey Esparza earns a good sum of money in her career. She has featured in several movies and tv series through which Audrey Esparza receives a good amount of money as salary.

Moreover, She also receives a decent amount of money from several fashion lines and brands as an endorsement. Allocating information from several sources as of 2018 it is found out that her current net worth is $500,000.