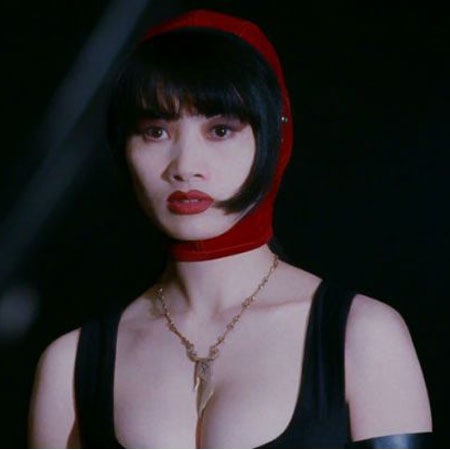 Bai Ling is a Chinese-American actress, well-known for featuring in the movies like Red Corner, Wild Wild West, etc. Once in 2009, she claimed that she is an alien from the moon where her grandmother lives in her childhood home which grabbed huge media and people attention.

Ling hasn’t married nor she has any child till now but had affair with several celebrity personalities. She had dated Lionel Richie, Damon Elliott, Bill Maher, Chris Isaak, etc.

Bai Ling was born on 10th October 1966 in Chengdu, China. Her father, Bai Yuxiang was a musician whereas her mother, Chen Binbin was an army in China and eventually became a music teacher, dancer, stage actress and a literature teacher at Sichuan University.

During Bai elementary school days, she learned to perform in different Cultural Revolution programme, and after completing high school, she served in Army.

She was entertaining in the musical theater and served as an Amery nurse as well. She states that during her Army days, she was sexually abused by her senior male officer who made her alcohol addiction and eventually led her to spend some time in a mental hospital.

After getting a discharge from a mental hospital, Bai Ling joined People’s Art Theater of Chengdu in 1981 and began her professional acting career. Her performance in the stage play Yueqin and Little Tiger drew movie director Teng Wenji attention which led her to debut in the movie On The Beach in 1985.

Dreaming to took acting career into next level, Bai temporarily moved to New York under visiting scholarship to attend the New York University’s film department and eventually obtained a special visa that allowed her to stay in the USA until she became a U.S. citizen.

Sooner, Ling started appearing in several American TV soaps and movies. Her performance as a psychological disorder girl in the movie The Shining Arc earned her wide recognition.

No long after, she landed on her first major American movie The Crow, in 1994. Her hit movie includes Maximum Impact, A Beautiful Life, Shanghai Baby, The Breed, Lost, etc. Currently, she is focused on her acting career and preparing for her upcoming movie.

Chinese-American actress, Bail ling has won the heart of millions of people either by her outstanding acting skills or by her stunning body figure. But only a few were able to win Bail’s heart.

She dated an American pop musician Chris Isak in 1999 but broke up in 2000. She also dated Thomas Jane in 2001, Bill Maher, American Comedian and television personality in 2003 but their relationship didn’t last for a year also. Afterward, she was in a relationship with Nick Carter in 2005.

Later, in 2007, she had a romantic relationship with Damon Elliott, an American music producer. The couple was deeply in love, and their strong bonding can be seen in several photos. Unfortunately, after years of dating the couple ended their relationship in 2008. Furthermore, she had also dated Mickey Rourke in 2009.

People move on as time passes, so do Bai Ling. She started dating a famous American singer-songwriter Lionel Richie but couldn’t last long.

Currently, Bai seems to be single, but her picture with several boys explain that she might not be. She did not reveal any authentic proof of her current relationship. Bai is neither married nor is a mother of any child.

Bai had featured in several movies and TV series through which she earns a good sum of money. According to different sources, it was found out that she obtains $900,000 per movie and $20k-30k per episode in TV series as her salary.

Ling had worked with several well-known Hollywood celebrities in different movies. Her several movies were quite a success and some hit box office with a big income. She has featured in more 23 movies which had collected $488,586,641 worldwide in aggregate box office collection. Allocating information from several sources as per 2018, it is found out that Bai current estimated net worth is around $3.5 million.