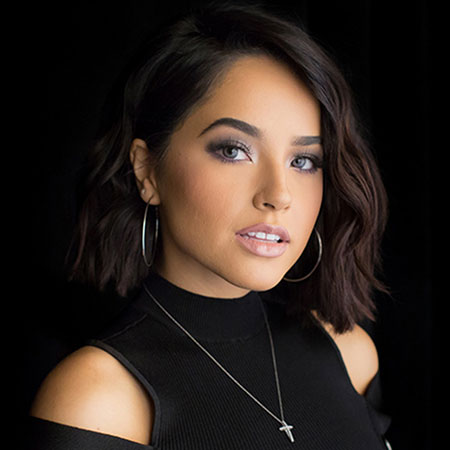 Becky G is a sweet lovely and talented American songwriter, rapper and singer, who received public recognition in 2011 when she started posting several videos of herself on YouTube by performing remixes of popular songs. She was successful in securing her name in the list of first Billboard Hot 100 entry with Shower in 2014.

RISE FROM THE GUTTER

Becky was born on March 2, 1997, in Los Angeles, California, United States. Her real name is Rebecca Marie Gomez but is mainly known by her stage name Becky G. She was raised in Inglewood, California area. She spent her early days in Moreno Valley with her Spanish-Mexican family. Her family was really poor and had a financial struggle. Because of financial struggle, her parents was compelled of selling their home. After selling their home, they moved into the garage of her grandparent’s house in Inglewood. She was only nine years old when she moved. Since her childhood days, she wanted to earn money and help her family to sustain a happy life. She started working part-time jobs and she also had included voice-overs and commercials. She started recording herself in Garageband. She has cited Jennifer Lopez, Selena, Christina Aguilera, Thalia as her musical influences.

WRITING HER NAME IN THE WORLD OF MUSIC

She began releasing music videos in 2011 through YouTube featuring her own lyrics rapped video. It was on top of popular hip-hop and pop songs. She has also done cover songs like Take Care, Novacane, and Boyfriend. All of the songs were released on a mixtape entitled @itsbeckygomez. She also did the cover of Kayne West and jay-Z’s song Otis which caught the attention of veteran songwriter Dr. Luke. She was signed to his Sony Music Entertainment. She then became a featured artist in single Wish U Were Here   which was sung by Australian Singer Cody Simpson in 2012. In the same year, she was featured artist in Oath by British singer Cher Lloyd and the remix version of Die Young by American singer Kesha along with Wiz Khalifa and Juicy J. She has also provided song Monster for the Sony Pictures Animation and Columbia Pictures animated film Hotel Transylvania featuring American rapper will.i.am. She then released the video for “Play It Again” on May 6, 2013, which became as the first single from her debut Ep Play It Again. It released on July 16, 2013. She released her second single Can’t Get Enough featuring American rapper Pitbull. The song was later sent to Latin radio and was received with heavy rotation and became Gomez’s first #1 Latin Airplay track.

She released her first single from her debut album title Shower on April 23, 2014. The song became her first solo charting entry on the Billboard Hot 100. Her second single titled Can’t Stop Dancin from her second debut album was released on November 14 in the same year. The song peaked at 88 on the Hot 100.