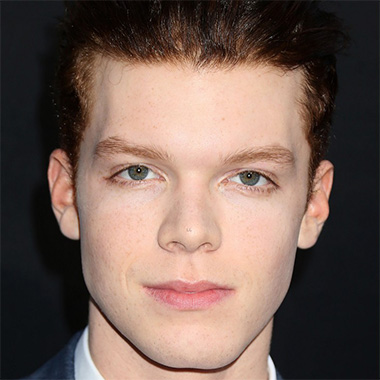 Cameron Monaghan is an American actor. He started his career when he was three years old as a child model. At the age of seven, he became a child actor. He is mainly known for his role on the drama series Shameless as Ian Gallagher. He is also featured in many other films including in Click as Kevin O’Doyle, in Prom as Corey Doyle, in Vampire Academy as Mason Ashford and in The Giver as Asher.

Cameron was born on August 16, 1993, in Santa Monica, California, United States. His father’s name is Diane Monaghan. Diane is an insurance claims specialist. After his birth, his mother, and his father relocated to Boca Raton, Florida. His mother sent his picture when he was three years old to modeling agencies. When he was five years old, he appeared on the cover of his first catalog and also was seen in his first regional commercial when he was seven. He studied at Addison Mizner Elementary School and started developing his acting skills. He then appeared I Little Palm Children’s Theatre’s production of Stuart Little, Winnie the Pooh, and The Pumpkin King. He also appeared in The Wishing Stone as Alex. The film was filmed in the Lake Worth, Florida area.

In 2003, Cameron Monaghan came to attention for his role in The Music Man as Winthrop Paroo alongside Kristin Chenoweth and Matthew Broderick. He was only nine years old when he played the role. According to director and executive producer Jeff Bleckner “There are some people when you put them up on film, they sort of pop off the screen at you. That’s how it was with Cameron. From the second we saw him, he was it. We were looking for anybody who had that wonderful appeal. And Cameron had it.” He then had a recurring role as Chad in 2004 in the comedy series Malcolm in the Middle, for which he was awarded Young Artist Award as Best Young television Actor. In the same year, he played a recurring role in comedy Ned’s Declassified School Survival Guide as Palmer Noid. He also guest-starred in the television films which includes Criminal Minds, The Mentalist, Numb3rs, Monk, Three Rivers, The Glades, Fringe, and Terriers. He appeared as Timmy in the film Brothers in Arms in 2005. He was seen playing as Kevin O’Doyle in the comedy movie Click. He was seen in The Santa Clause 3; The Escape Clause, Dog Gone, Safe Harbor and Another Harvest Moon. He also appeared in Three Investigators film series as the boy detective Bob Andrews.

In April 2010, Cameron Monaghan joined the cast member of the comedy drama series Shameless. The series was premiered in January 2011 and he played as Ian Gallagher. The character is about a gay teenage son of a large dysfunctional Chicago family. His role was highly criticized by everyone, even by the celebrities. He then started appearing in a variety of episodic television series. In 2011 he guest-starred in crime series NCIS as Nick Peyton. He also appeared on the series Rizzoli & Isles as Jonathan McKenna in the same year. He played as a 19-year-old boy named Eddie Sandow in crime series Law & Order: Special Victims Unit. He co-starred as Corey Doyle in teen drama Prom in 2011. He then appeared in the adventure film Vampire Academy as Mason Ashford. He played as the psychotic Jerome in Gotham.

PERSONAL FIGURE BESIDE HIS CAREER

Cameron Monaghan is very interested in music and playing drums, harmonica, ukulele, and also guitar. He is now teaching himself to play the keyboard. He was once rumored to be gay but he tweeted on Twitter as “This is the only time I will answer this here: No, I’m not gay. Yes, I play a gay character. No, the question should not be relevant.” And also “Thanks for the kind words, everyone. It feels a bit odd to ‘come out’ as a straight guy.”