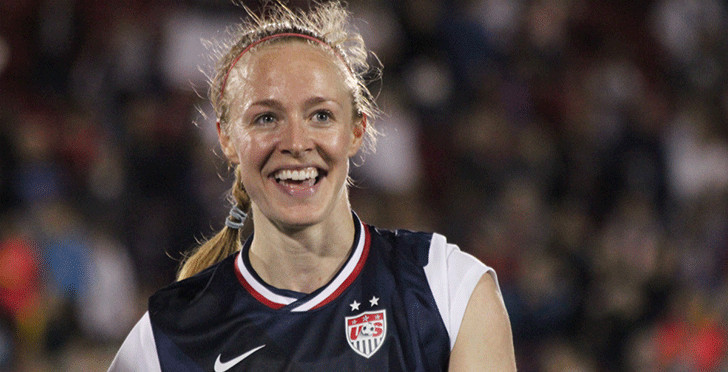 Born on June 6, 1985, Sauerbrunn was raised along with her two older brothers Grant and Adam. She was born in St. Louis, Missouri as daughter to Scott and Jane Sauerbrunn. Sauerbrunn completed her high school education from Ladue High School, where she was a four-year letterwinner in volleyball, basketball and soccer. She was also school soccer team captain and played from the position of sweeper and central midfielder. She attended University of Virginia and played soccer for Virginia’s Women soccer team from 2003 to 2007. She graduated from University of Virginia with majored in English.

In her senior year, she scored 21 goals with 19 assists which led her to be 2003 Missouri Gatorade Player of the year along with 2002 and 2003 Parade All-American, 2001 NSCAA Youth All-American. She also played for J.B. Marine Club team and during her career, the team won four state cup championship and the 2000 regional championship. During her days in University of Virginia, she was named the National Soccer Coaches Association of America Scholar Athlete of the year.

Sauerbrunn has also made appearances for various soccer club such as Washington Freedom, D.C. United Women,  and FC Kansas City. During 2008 W-League season, she played for Washington Freedom and was picked as the third overall in the 2008 WPS General Draft by the club. After the suspension of the Women’s Professional Soccer League, Sauerbrunn started to play for D.C. United from 2012, but due to national team obligations, she played very less minutes for D.C. In January 11, 2013 she joined FC Kansas City along with other three members from the United States women’s national team.

She played her first match for United States senior national team against Canada in 2008. Sauerbrunn played from the beginning in the semi-final win against France in 2011 FIFA Women’s World Cup after Rachel Buehler was red carded in quarter final. She was part of the United States team when the team won gold medal in 2012 Summer Olympics. Recently in 2016, she became co-captain for the national team.

As an individual, she won various awards. She was the winner of NWSL Defender of the Year. She won the title for three consecutive years 2013, 2014, 2015 and received nomination of U.S. Soccer Athlete of the Year 2015. Besides her career in field, she was featured in the EA Sports’ FIFA Video game series in FIFA 16 and was ranked as No. 10 women’s player in the game.

Sauerbrunn stands tall with height of 5’7’’. There is no any information about her married life, relationship and affairs. Despite of being busy on her professional career, Sauerbrunn prefers to react with her fan via social networking sites such as facebook, twitter and instagram.