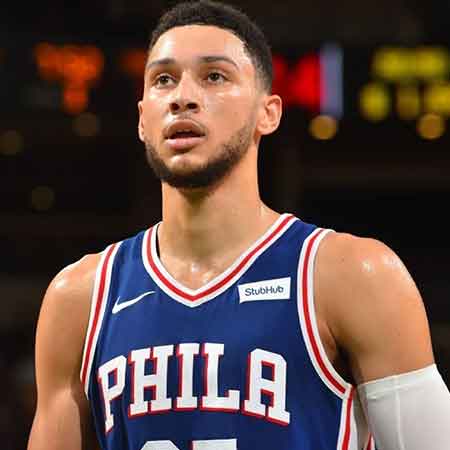 Ben Simmons is an Australian professional basketball player, currently plays for the Philadelphia 76ers of the National Basketball Association (NBA) in the position of a point guard. Prior to that, he played for the Louisiana State University (LSU) Tigers. He is 2018 NBA All-Rookie First Team.

The tall and handsome basketball player is currently dating an American model and television personality, Kendall Jenner. Previously, he was in the relationship with several popular celebrities such as Tinashe, Dylan Gonzalez, and Brittany Renner. However, their relationship was only meant for a short period of time. Let’s know detail about this Australian professional basketball player’s personal life as well as career, education, siblings, nationality, ethnicity, early life, salary, net worth, lifestyles and much more. Stay with us!!!

Ben Simmons was born on July 20, 1996, in Melbourne, Victoria, to Australian-American parents. He is a son of Dave Simmons, father, who was also a basketball player and Julie Simmons, mother. He has one biological sibling, sister, Olivia and four half-siblings, Melissa Tribe, Sean, Emily Katherine, and Liam Simmons. Regarding his nationality, he is Australian-American and is of mixed descent.

Being a son of a basketball player, Simmons got involved in basketball since his early age. He played basketball in the Newcastle Hunters at the age of seven representing the under-12 team. Besides, he also played junior rugby league for the Western Suburbs and South Newcastle in a local rugby league. Simmons completed his education from the Montverde Academy and Louisiana State University.

After playing for Montverde Academy and Louisiana State University, Ben joined the professional basketball team, Philadelphia 76ers in the 2016 NBA Summer League. Since then, he has been playing for the team. Apart from league basketball game, Ben also represents for the Australian National Basketball team.

The height of 6 feet 8-inch basketball player, Ben Simmons is currently dating a beautiful American model, Kendall Jenner. Their relationship was known to the public after they were spotted together on a lunch date at the Beverly Hills Hotel. Moreover, they were also seen at the clubby Bowery restaurant Vandal with a group of friends. The couple seems very happy together.

Talking about Ben’s past affairs, he was in the relationship with several beautiful women such as Tinashe, Dylan Gonzalez, and Brittany Renner. However, their relationship lasted for the only brief time. Moreover, in 2017, he was also spotted together with American personality, Amber Rose. But till date, it is unsure whether the coupled dated or not.

Ben Simmons collects a decent measure of cash from his professional basketball career. He makes approximately $6,168,840 as a salary from Philadelphia 76ers per year.

Besides, he has also increased his net worth through several endorsement deals. He signed with Nike making $5 million a year within his first two seasons in the league. As of 2018, the exact figures of his net worth is under review but analyzing his works. It seems to be in millions of dollars.

Talking about his cars collections, he also owns numbers of expensive cars such as Ferrari, Bentley and so on. Moreover, he also owns $3 million house home in Beverly Grove.