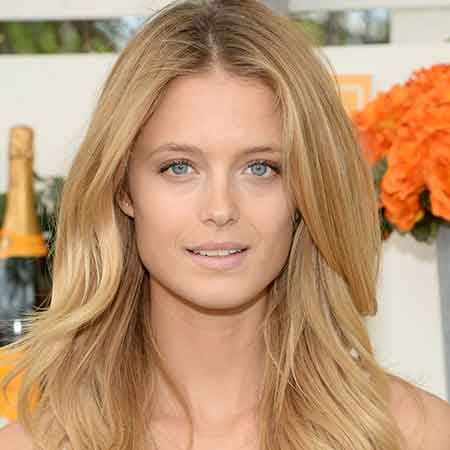 Kate Bock is a Canadian fashion model who has featured in the Sports Illustrated Swimsuit Issue from 2013 to 2018. Moreover, she has further modeled for the Victoria’s Secret and has also appeared in pages of magazines including Elle and Maxim.

Bock is currently in a relationship with an American basketball player, Kevin Love.

Kate Bock was born on 30th January 1993, in Vancouver, Canada as Kate Lynne Bock. She belongs to a Canadian nationality. However, Bock hasn’t revealed any information about her parents. She grew up along with her brother Ian Bock and sister Anna  Bock.

Bock completed her graduation from the West Vancouver Secondary School. Later Bock moved to Paris where she attended the French Immersion school and learned the French language.

A modeling scout from Lizbell discovered Kate Bock for the first time in a local swimming pool when she was 12 years old. But initially, Bock wasn’t able to give her full time in modeling because of her school. So she used to do modeling just during summer vacations.

After her graduation, Bock moved to Paris to pursue her modeling career. Since then she gave her full time on modeling and modeled for Victoria’s Secret. Bock further appeared in the pages of magazines including Elle and Maxim.

Besides this, Bock also appeared in music video of the song Jack Sparrow in 2011. Furthermore, she also owns a Jewelry line Cattura Jewelry which she began in 2016.

Along with her successful career, Kate Bock has a successful love life too. Well, the 25 years old gorgeous model Bock is not married yet. However, she is currently in a relationship with an American professional basketball player Kevin Love.

The couple began dating back in 2016 and are still together. They are seen hanging out together and further attends events together. Bock and Kevin both shares adorable pictures of each other on their Instagram.

Although the couple is dating, none of them have mentioned any plans of getting engaged or married. They have maintained a peaceful relationship and yet there are no any rumors of their separation. Besides this, Bock hasn’t been in any other relationships.

Since the age of 12 Kate Bock began her modeling career and till date, she is active in the same field. Bock has featured in pages fo popular magazines including  Maxim and Elle. On the other hand, she has further appeared in the music videos.