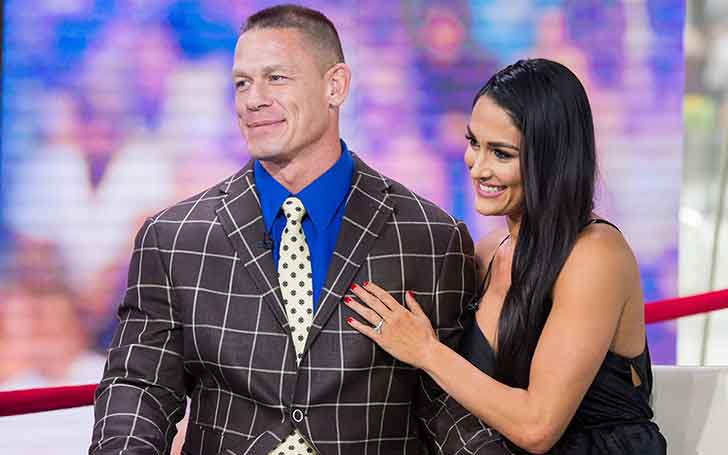 Sometimes two people have to fall apart to realize how much they need to fall back together. So has been the case for WWE royalty John Cena and girlfriend, Nikki Bella. The couple is reportedly dating again after calling off their engagement on April 15, 2018. Let’s dish out the details.

Nikki Bella and boyfriend, John Cena were previously involved in six years of romance with each other. They even got engaged but perhaps the time was wrong for them. To know more about their relationship, dating news, stay tuned.

Nikki Bella and Boyfriend John Cena Back Together?

Nikki Bella previously called off the engagement due to John Cena’s hesitation to start a family with the Totally Bellas star. Well, here is a good news for all the fans of the couple. They have rekindled their romance after a month and half of calling off the engagement. An insider told US Weekly:

“Nikki called off the wedding earlier this month so she could have more time to make a decision with what she wanted in life.”

“Calling off the wedding was the right decision at the moment and their relationship only grew from it. It didn’t mean that any love was lost, or that they lost any feelings for one another, but they both have realized that they love each other and want to be with one another.”

Likewise, E! reported that “Nikki Bella and John Cena are working on their relationship and taking it day by day. They appreciate all of their fans and their continued support.” The little break has turned out to be therapeutic for the pair.

Following their breakup, John Cena had been very vocal about wanting to get back together with Bella. During an interview on Today, the actor claimed that he wanted to make Nikki his wife and become a father to their children.

This took Nikki by surprise since the main reason for their breakup was John Cena not wanting kids. Well, looks like the WWE star had a change of heart. The two were spotted in San Diego a few days after that.

In the latest episode of Total Bellas, Nikki and John are seen reunited the first time after calling it quits. She said in a confessional clip that she is still very much into him and his presence made her feel like her heart was sinking deep into her stomach.

Cue the awws. Well, it is clear that the two are still in love with each other. They just need to work on their differences. Now, the couple is a step closer to reconciliation.

Nikki Bella And John Cena Wedding Plan Back On?

So, does this whole ordeal mean the wedding is back on for Nikki and John? Well, not yet. The two are still working on their relationship. However, a future possibility is not off the table. Nikki said in an interview with Life&Style that she had not returned her wedding dress back yet.

Nikki kept the dress because she felt that the two would eventually end up together and get married. He is her best friend and she is still in love with him. Well, it seems like the two time WWE Diva Champion knew the two would reconcile all along.

Hopefully, the couple works out their differences and gets married soon.