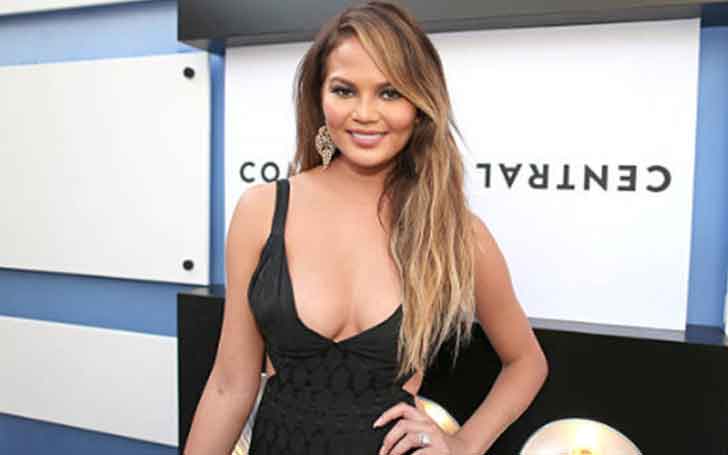 Chrisy Teigen is human everyone! The model has taken another stride to show people that she is as real as they come. People love to idolize their celebrities and think that they look flawless all the time. Well, Teigen is here to break the assumption once more as she shows her post-baby stretch marks in her Instagram stories.

Teigen and husband John Legend recently welcomed their second child, a son Miles Theodore Stephens on 16th May 2018. They also have a daughter named Luna Simone Stephens. In this digest, we will be exploring the couple’s relationship, married life, and children along with the stretch marks story.

It is well known the post-pregnancy body is not flawless. It takes time for people to get back into shape after having a baby. Well, Chrissy has decided to get candid about her post-baby body. The model showed her stretch marks on the Instagram story along with for millions of her fans to see.

Teigen commented in the background, “No! I thought I did such a good job with my creams! My hips!” This proves even models get stretch marks. This is not the first time the actress has gotten real about her stretch marks and body.

Prior to this, the model shared a picture of stretch marks on her upper thigh on 19th January 2017, with the caption, ‘ Whatevs”

We could not agree more. Teigen, 32, has shown that pregnancy is not always glamorous even for a celebrity. It is natural for a body to go through changes during and post pregnancy. So, embrace it.

Chrissy Teigen and John Legend got married on 14th September 2013, after dating for over six years. The pair has become one of Hollywood’s most cherished couple. The two are #relationship goals for sure. They joke around a lot and keep things fun.

Even after being very busy and having children, the pair makes sure to spend some quality time together. Recently, the All of Me singer and Sports Illustrated model were spotted holding hands and enjoying their day out on Melrose Place, West Hollywood. You can check out the picture below.

The two have kept the romance alive even after over four years of marriage. There are no signs of divorce between the two so far. They are happily married.

The couple’s children are adorable. Luna and Miles have a good relationship. Legend revealed that Luna was still getting used to not being the only child. He also added that she was making sure to get attention.

It seems Luna is doing good as a big sister. Teigen recently posted a picture of Luna giving Miles a pacifier. It is the cutest thing ever. Check it below.

So, we can assume the children are getting along just fine. Let’s hope this continues throughout the years.