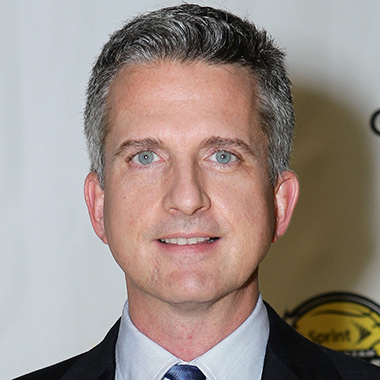 Bill Simmons is an American sports columnist, analyst, author, and podcaster. He gained attention with his website as “The Boston Sports Guy”. He also wrote for ESPN.com and hosted The B.S. Report on ESPN.com.

Bill was born on September 25, 1969, in Marlborough, Massachusetts. His birth name is William J. Simmons III. His parents are William Simmons and Jan Corbo. His stepmother’s name is Molly Clark. His parents got divorced when he was 13 years old.

He studied at the Greenwich Country Day School and later at the Brunswick School for high school. He then attended the Choate Rosemary Hall in Wallingford, Connecticut and completed a postgraduate year in 1988. He also attended the College of the Holy Cross. In 1992, he completed his B.A. in Political Science. He received his master’s degree in print journalism from Boston University.

After gaining fame as “The Boston Sports Guy” he got a job in ESPN in 2001 to write three guest columns. His second column “Is Clemens the Antichrist?” became one of the most e-mailed articles on the site. After the first sixteen months, he wrote for Page 2 which gained popularity. In 2004, an online cartoon was launched by ESPN on his column. He writes a column per month for his page which is titled “Sports Guy’s World”. He is also one of the country’s most widely read sportswriters. According to ESPN, in 2005 his column-averaged 500000 unique visitors a month. According to ComScore, his column had averaged 1.4 million page views and 460000 visitors a month. In 2007, he formulates the idea for the series “30 for 30”. On October 6, 2009, the series was premiered and was directed by Peter Berg. He works as an executive producer for the project.

He began to broadcast for ESPN.com called Eye of the Sportsguy on May 8, 2007. The broadcast was changed to The B.S. Report on June 14, 2007. In 2002, he began writing a bi-weekly 800-word column for ESPN The Magazine and after three years he started writing 1200 words. In October 2007, he was announced to join the television series E:60 as a special contributor. In 2009, he worked at the annual MIT Sloan Sports Analytics Conference as a moderator and panelist. In September 2015 his contract was expired from ESPN.

Simmons is happily married to Kari Simmons. The couple together is blessed with two children, a daughter named Zoe Simmons and a son named Benjamin Oakley Simmons. He is a fan of Boston’s team which includes the Boston Celtics, Boston Red Sox, and New England Patriots.

He released his first book, “Now I Can Die in Peace” on October 1, 2005. The book became the New York Times best-selling book. On October 27, 2009, he released his second book “The Book of Basketball: The NBA According to the Sports Guy”.

As of 2016, Bill Simmons’ net worth is estimated to be $15 million dollars approximately.