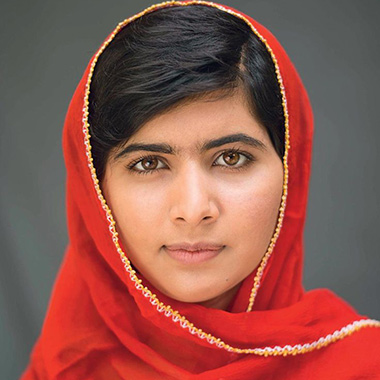 Malala Yousafzai is a Pakistani activist born on July 12, 1997, and a youngest Nobel Prize laureate. She is known for her active campaign in human rights and female education.

Malala was born in the Swat District, Khyber Pakhtunkhwa province, Pakistan. She is from Sunni Muslim family of Pashtun ethnicity and has two younger brothers. Her parents are Ziauddin and Tor Pekai.

Malala is fluent in English, Urdu, and Pashto and mostly influenced by her father who is also an educational activist and owns chains of the private school named Khushal Public School. Her father Ziauddin wants her to be politician talked her about politics and permitted her to stay up late at night. But she always wanted to be a doctor.

In September 2008, Yousafzai condemned Taliban for taking away the basic right of education from women. This interview was viral on televisions and newspapers. In 2009, she was an educator in the Institute for War and Peace and was completely engaged in helping young minds to open up for their rights through public debate, journalism, and debate.

In 2008, Aamer Ahmed Khan and his colleagues of BBC Urdu were searching a school girl to write about their harsh life anonymously in Swat District. BBC Urdu’s correspondent Abdul Hai Kakar in Peshawar was in touch with Malala’s father Ziauddin and request him to find a girl willing to do this job. Ziauddin couldn’t find any girl willing to do it because of the fear of Taliban and risk of the family but instead suggested his own daughter Malala for this risky job. Malala was only in 7th grade then and also BBC unanimously agreed and her blog was published under pseudonym “Gul Makai” meaning cornflower in Urdu.

Malala’s first writing was published on BBC’s Urdu blog on January 3, 2009. She used to write down in the paper and the reporter Khan used to scan and email it to BBC. The Taliban had destroyed hundreds of girls school and published a notice that after 15 January no girls are allowed to go to school. On February 18, Malala condemned Taliban on the show “Capital Talk” about current affairs. The ban for girls to go to school was lifted by Taliban on February 21 until the exams but the full black dress Burka was compulsory.

Malala Yousafzai was becoming more popular due to her campaign and getting death threats and on October 9, 2012, while she was returning to home after taking the exam a masked man entered her bus, identified her and shot her in her head. The bullet passed through her head, neck, and shoulder and her left size of the brain was damaged. She was airlifted to a military hospital in Peshawar and doctors began operation. The government agreed to compensate all the medical expenses and many offers to treat Malala came from all over the world.

Yousafzai was taken to U.K for her treatment after three days in Queen Elizabeth Hospital Birmingham where injured military in the conflict was treated. She came out on October 17, 2012, and later on she was stable and she had undergone 5-hour long surgery on February 2, 2012, to restore her hearing and construct her skull.

Malala was admitted to all-girls Edgbaston High School in Birmingham since 2013 and achieved A’s and A+ GCSE exams in 2015.

Her assassination attempt gained the worldwide media coverage and many world leaders and organizational head criticized this event. Many protests was held in the different city of Pakistan and even Pakistan Government offered 10 million rupee whoever finds the shooter or give the correct information.

Lots of suspects were arrested and interrogated and many of them were freed due to lack of evidence. 10 people of the militant group were given life sentence but not sure that any one of them being the shooter.

Malala has met various world leaders and express her thoughts in various universities like Harvard University and the Oxford Union. She also opened a school in  Bekaa Valley, Lebanon for Syrian refugees which were funded by Malala non-profit fund.