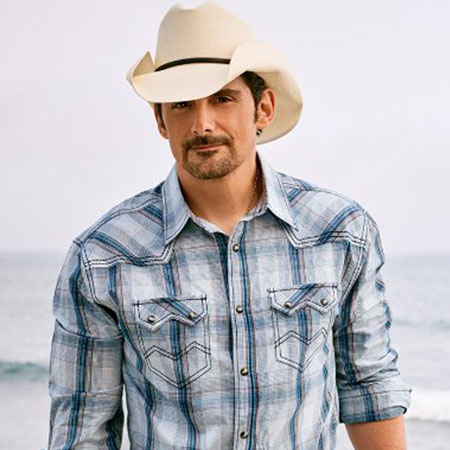 Brad Paisley is an American country music singer as well as a songwriter. So far, he has 10 studio albums and has sold over 12 million albums. Most of his albums are certified Gold or higher by the RIAA.

Brad was born on October 28, 1972, in Glen Dale, West Virginia, U.S. His birth name is Brad Douglas Paisley. His parents are Douglas Edward “Doug” Paisley and Sandra Jean “Sandy” Paisley. He got his first guitar from his maternal grandfather. When he was 8 years old, he was taught to play guitar. He made his first public performance when he was 10. He wrote his first song titled “Born on Christmas Day” at the age of 10. He used to take guitar lessons with a local guitarist. He formed a band with Goddard. The band’s name was “Brad Paisley and the C-Notes”. While he was in junior high, he performed “Born On Christmas Day” which was heard by his principal. His principal invited him to play at the local Rotary Club meeting. He was asked to be a guest on Jamboree USA. He opened for country singers such as George Jones, The Judds, and Ricky Skaggs.

He attended John Marshall High School and graduated in 1991. He then attended West Liberty State College for two years. He won ASCAP scholarship to Belmont University. He majored in music business from there. While he was in his college days he met Frank Rogers, Kelly Lovelace, and Chris DuBois. After his graduation from Belmont University, he signed a contract with EMI Music Publishing.

Paisley released his debut song “Who Needs Pictures” on February 22, 1999. He made his first appearance on the Grand Ole Opry in the same year. He released his hit “He Didn’t Have to Be” which became No. 1. His second number 1 hit is “We Danced”. His album was certified platinum in February 2001. He was awarded the Country Music Association’s Horizon Award in 2000. He became the youngest member to join as he was only 28 years old. He sang a song called “Hard to Be a husband, Hard to Be a Wife” with Chely Wright at PBS. He sang backing vocals on “Not as In Love” and “One Night in Las Vegas”.

He was awarded the CMA Music Video of the Year for “I’m Gonna Miss Her” in 2002. His singles “I Wish You’d Stay”, “Wrapped Around” and “Two People Fell in Love” are of his album Part II. He also toured the country as the opening act for Lonestar.

In 2003 he released his third album “Mud on the Tires”. The hit song “Celebrity” is from his album. The title track “Mud on the Tires” of the album successfully reached Billboard No.1. The ninth track from the album is “Whiskey Lullaby”. The track reached NO. 3 on the Billboard Hot Country Singles & Tracks. His album was certified double platinum.

In 2005 he toured with Reba McEntire and Terri Clark and released “Time Well Wasted” which contains 15 tracks. The album includes “Alcohol”, “When I Get Where I’m Going”, “Out in the Parking Lot”, Cornography” etc. His album was awarded the Country Music Association CMA Award. The album also won ACM Awards.

He was in a relationship with Chely Wright in last months of 2000. In 2001 he started dating Kimberly Williams. On March 15, 2003, they got married at Stauffer Chapel on the campus of Pepperdine University. The couple has two sons named William Huckleberry and Jasper Warren.

Brad Paisley, an active Freemason, a member of Hiram Lodge #4 in Franklin, Tennessee has a net worth of $65 million dollars (2016).??