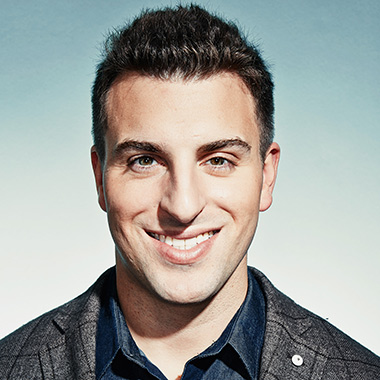 Brian Chesky is a dashing handsome American internet entrepreneur, mainly known as the co-founder and CEO of hospitality exchange service Airbnb. In 2015, he was named as one of the ‘100 Most Influential People’ by Time.

Brian was born on 29 August 1981, in Niskayuna, New York, United States of America. His full/birth name is Brian Joseph Chesky. Raised by social workers parents Deborah and Robert H. Chesky, Brian was interested in drawings, design, art, redesigning toys and shoes as a child. As years pass by, he started to develop an interest in landscape architecture and design.

Chesky’s intentions in design led him to attend the prestigious Rhode Island School of Design in 1991. He then graduated in 2004 after earning Bachelor’s in Fine Arts in Industrial Design. It was during his time at RISD, he met his friend and one of the co-founding members and Chief Product Officer of Airbnb, Joe Gebbia.

During his time at RISD, Chesky teamed up with his two other friends and ran the NADS Hockey Team. Their dream was to turn the team into a brand as it was on the verge of cancellation. While they were re-banding they came up with notorious RISD mascot, Scrotie which was the logo for the NADS Hockey Team. According to him, it was his greatest creation till date. He also says that the Scrotie project was one of his forays into entrepreneurship. He has his own best method of improving his service with his quotes “eating your own dog food”. The proverb means using Airbnb himself only. He does not own a home since 2010

THE BIRTH OF AIRBNB

Soon after graduation, Brian Chesky worked at 3DID, Inc as an industrial designer in Los Angles. He later moved to San Francisco, where he shared an apartment with Gebbia. Initially, they were both unemployed and were in need of money. While they were seeking for a job, there was an Industrial Design conference coming up which was held by the Industrial Design Society of America. During that conference, many hotels were overbooked. They thought that they could make some money by renting their place out. They purchased three airbeds and marketed their idea by creating a website which is called as Air BED AND BREAKFAST, which later evolved into the foundation of Airbnb.

On February 2008, Harvard graduate and technical architect Nathan Blecharczyk became the third co-founder. When Airbnb was launched in 2008, they had only two customers in which one of them was Chesky. At first while starting up the company they had a difficult situation as the idea behind the company was not really appealing. To protect their company from declining they created Obama O’s and Cap’n McCains, which was based on Presidential candidates John McCain and Barack Obama. Chesky recalled and said that it was his low point. They succeed in impressing Y Combinator as they saw their boxes. Y Combinator accepted Airbnb into its seed funding program.

After some time their company finally started picking up and it is now at its high point. He describes that his company has grown a lot since each SXSW at SXSW 2013. There were 1000 people two years ago in Austin, Texas using Airbnb at SXSW. At 2013 SXSW 8000 people started using Airbnb According to the calculation there are about 50000 to 60000 people who are using Airbnb on average each day. In its first year, the company opened several new offices in Europe.

The company went on to blossom and even sponsored the 2016 Summer Olympics in Rio deJaneiro. In 2014, he announced that over 12,000 people stayed in Airbnb homes during the 2014 FIFA World Cup. The company’s net worth is estimated to be $20 billion dollars as of May 2015.

According to his public profile, Brian Chesky is not yet married. However, Chesky who still lives in Airbnb homes is reportedly said to be dating Elissa Patel. They were often seen together on staycations in the neighborhood. He and his girlfriend, whom he met from Tindr do yoga every Thursday and occasionally goes for a long walk together.

In 2015, Chesky was named on the Forbes list of America’s Richest Entrepreneurs Under 40. He was also recognized on TIME’s 100 Most Influential People for 2015. In May 2015, former President Obama named Chesky as an Ambassador of Global Entrepreneurship. As of September 2016, his net worth his estimated to be $3.3 billion dollars. Brian is active on several social media such as Twitter, Instagram, Facebook and so on.