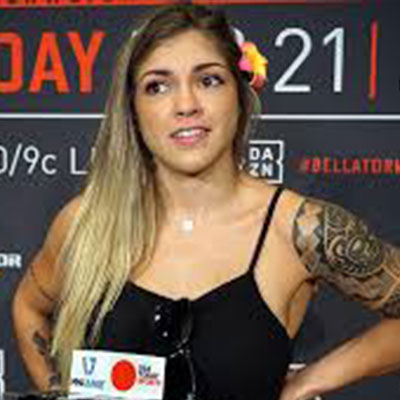 The female mixed martial artist, Bruna Ellen currently competes in flyweight division of Bellator MMA. She began her career in 2013. So far, she has a record of 4 wins and 1 loss. The 21-year-old fighter has an affiliation with Team Nogueira Campinas of Brazil.

The fighter seems to be single at the moment. She has not been rumored to be dating anyone. It seems no one has been able to catch this beautiful fighter’s attention as of now. To know more about Ellen’s early life, career, relationships, dating life, net worth, houses; keep scrolling.

Born in Campinas, Sao Paulo, Brazil; Ellen is a proud Brazillian. She was born on 26 June 1996. The identity of her parents is unknown. She has managed to keep such personal information under wraps. She can speak fluent Portuguese.

Ellen’s education is also not known. The fighter began her training in kung fu and boxing at the tender age of 12. Her priority has always been on training and fighting so her education may have been compromised.

Ellen began her career in 2013 by competing in Sanda Tournaments held in Argentina, China and Turkey. The boxing tournament helped Ellen take on the pressure on international grounds. Nevertheless, her goal has been MMA from the beginning.

Ellen made her professional debut in MMA via MF Max fight against Elen Torres in 2015. She then won her next fight against Pamela Mara Assis via TKO. Much to her delight, Ellen was signed by Bellator in 2016 at the age of 20.

The young fighter made her Bellator debut with a bout against Jessica Middleton. Ellen faced her first loss in her professional career in the fight. She did not let that one fight crush her spirits as she came back with double winning streaks against Carmela James and Veta Arteaga respectively.

Bruna Ellens is not married yet. She is still quite young; just stepping on her 20s. It does not seem like the beautiful fighter is in a relationship with anyone as of now. Her name has not been linked to anyone.

Scrolling through her Instagram page, we can find that she is focused on her professional career more. She posts many photos citing her partnerships with various people on her MMA journey.

Well, the fighter may be dating secretly. She might want to keep her dating life private. For now, we can assume that Ellen is single.

The net worth of Bruna Ellen is under review at the moment. She is still at the early stage of her career. The salary of the fighter is yet to be disclosed. Nevertheless, she seems to e living a comfortable lifestyle in Brazil.

Aside, Ellen owns an iPhone 7 plus which has a market price of $769.  She has also promoted Flex Nutrition, Acai and many other brands on her Instagram page.

The fighter is still active in her career. We can expect to see more of her in coming days. Her net worth may experience a rise as a result.