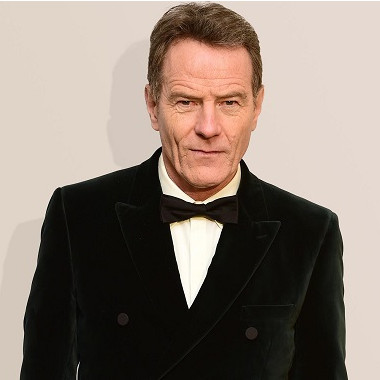 Primetime Emmy Award-winning multi-talented actor, Bryan Cranston, well known for portraying Walter White on the AMC crime drama series “Breaking Bad”. and as Malcolm in the Middle and Seinfeld. He has also gained a Tony Award for his stage work as well as Golden Globe and Oscar nominations for his performance in the 2015 biopic Trumbo.

After getting divorced from his first wife, Michaelle Louise (Mickey) Middleton, Bryan started dating actress Robin Dearden, whom he met during the recording of the show Airwolf in 1984. The couple got married on 8th July 1989 and have a daughter, Taylor Deardon Cranston

Bryan Lee Cranston was born on 7th March 1956, in Hollywood, California. He is the second son of Audrey Peggy, a radio actress, and Joseph Louis Cranston, an actor, and former amateur boxer. Cranston spent his early life watching his father, Joe, live a depressed life for missing to gain the big-screen stardom he desired for. At the age of 12, his parent’s divorce.

The necessity forced Cranston and his older brother, Kyle, to go in with their grandparents for a year. The two boys did not see their father for a stable decade. He was raised by his grandparents, living on their poultry farm in the Canoga Park, Los Angeles, California.

He attended Canoga Park High School and graduated from there. During his high school days, he was a member of the school’s chemistry club. In 1976, he gained an associate degree in police science from Los Angeles Valley College.

Bryan began his career appearing in several theater shows. Soon started doing commercial and TV work. Finally, in 1980, he got the role of Quarterback in the TV movie “To Race the Wind”. Then, in 1982, he was seen starring the role of Sam in the TV series “Crisis Counselor”. He has also starred in several movies in his life.

In 1987, he made his feature film debut by starring the role of a Paramedic in the satirical comedy film “Amazon Women on the Moon”. Next year he appeared in the movie “The Big Turnaround”. His first big role came when he has cast a 9-episode recurring spot on the TV series “Raising Miranda” as Uncle Russell.

Then, he continued to hold small television and film roles, including a recurring spot on Seinfeld as a dentist from 1994 to 1997.

In 1997, he played Ranger Captain Ericsson in the Babylon 5 episode, “The Long Night”. In 1998 he was cast as Buzz Aldrin on the HBO miniseries “From the Earth to the Moon”. At the same year, in 1998, Cranston appeared in an episode of The X-Files, which was written by Vince Gilligan.

Two years later, he was cast as the father Hal in the Fox sitcom “Malcolm in the Middle” in 2000, which ran for six years. The producers of Breaking Bad were initially skeptical about Vince Gilligan’s choice, since they associated Bryan with his comedic role as Hal, but changed their minds after Gilligan showed them Bryan’s scenes from The X-Files.

Cranston has appeared in a couple episodes of How I Met Your Mother in 2006 as Ted’s obnoxious boss. He also was on King of Queens as the loud neighbor with the pool overlooking the privacy fence.

In 2008, he was cast in Breaking Bad as Walter White, a high school chemistry teacher who appeared with terminal lung cancer. Walter teams up with Jesse Pinkman, former student (played by Aaron Paul), to produce and sell methamphetamine to secure the well-being of Walter’s family after he dies.

Bryan’s work on the series met with popular, winning him the Primetime Emmy Award for Outstanding Lead Actor in a Drama Series. The show has been named one of the greatest television shows of all time by many critics, with ratings skyrocketing every season till it led 99 out of 100 in the final season.

During the time when Breaking Bad series came to a close, Cranston was cast as Dalton Trumbo in a new biopic about the blacklisted, Academy Award-winning screenwriter in 2013. Afterward the 2015 release of Trumbo, Cranston received both Golden Globe and Oscar nominations.

Bryan has also earned acclaim for work in the theater, winning a 2014 lead actor Tony for his portrayal of President Lyndon B. Johnson in “All The Way”. He reprised his role as Johnson in the HBO TV-film by the same name in 2016 and received a Golden Globe nomination for best actor.

His other 2016 projects included the films Wakefield and The Infiltrator. Cranston also gave a voice the character Li, Po’s biological father, in Kung Fu Panda 3, and released his New York Times bestselling memoir A Life in Parts (2016).

In 2017, he played Zordon in the superhero film Saban’s Power Rangers. He turned to the successful franchise after voicing the characters of Snizzard and Twin Man in the Mighty Morphin Power Rangers TV series early in his career.

Bryan Cranston as a Director

Cranston is also a director, producer, and screenwriter. As a director, he made his directorial debut in 2000 by directing the TV series Malcolm in the Middle which he directed in seven episodes, three episodes of Breaking Bad, two episodes of Modern Family, etc. He also directed the TV series Big Day and Special Unit in 2006.

Bryan is an American and is of German, Irish and Austrian- Jewish descent. Bryan got married to Michaelle Louise (Mickey) Middleton on 10th November 1977. As a loving spouse, they continued their married life for the next half-decade. But they divorced on 8th of April 1982.

A few years later, Bryan started dating actress Robin Dearden, whom he met during the recording of the show Airwolf in 1984. After years of romance, they got married on 8th July 1989. They have a daughter, Taylor Deardon Cranston born in 1993, also appeared in an episode of Breaking Bad.

Actor Bryan Cranston (R) and wife, Robin Dearden attends the “Charles James: Beyond Fashion” Costume Institute Gala at the Metropolitan Museum of Art on 5th May 2014, in New York City.

Bryan doesn’t talk much to the media about his beliefs or religion. Brought up into a family of actors, his dad was Austrian-Jew while his mom was of German descent. Bryan didn’t follow his folk’s beliefs and has all the earmarks of being nearer to rationalize or agnostic.

The actor is a Democrat and has always supported the Democratic nominees. He endorsed Hillary Clinton for the 2016 presidential election. On 31st October 2016, he made news for stating that he would move to Canada if Trump was elected as President.

Cranston has a beach house in Ventura County, California designed by him and is a co-owner of the independent theater Cinemas Palme d’Or in Palm Desert, California. He is a keen fan of Baseball and used to play during his college days.

Being an actor, Bryan has featured in several movies and TV series where several of them are successfully hit. He also earns a decent amount of money after directing several movies. The 5′ 10″ actor has an estimated net worth of $30 million. He holds an American nationality and belongs to white ethnicity. He is also active on social networking sites.