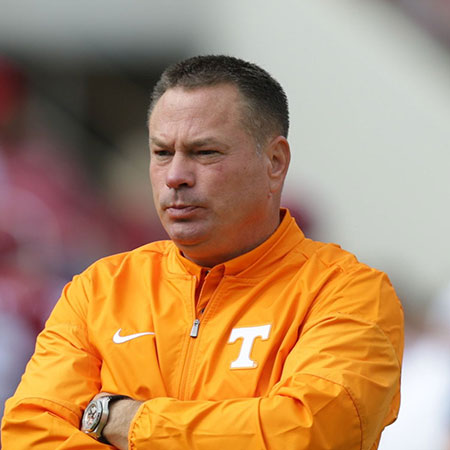 Lyle Allen “Butch” Jones, Jr was born on January 17, 1968, in Saugatuck Michigan, United States. He is a Michigan native holding white ethnicity and American nationality.  His star sign is Capricorn.

Jones attended Ferris State University and completed his graduation in 1990. While in college, he played college football and also did some training and internship to pursue his career, expertise on football. He was an intern for Tampa Bay Buccaneers for a year from 1987 to 1989.

Butch Jones started his career at Rutgers University as a graduate assistant after completing his graduation in 1990. He also served as offensive coordinator at Wilkes University for two years. In 1995, he went back to Ferris State University to serve as offensive coordinator. Under his guidance, Ferris State was top-ranked offense team nationally for three years continuously. In 1998, he became a coach for Central Michigan and offensive player-caller for two-year starting from 2002 till 2004. In 2005, he worked for Rich Rodriguez at West Virginia University and under his lead, the University won back to back 8 season.

Again, in 2007, he got the opportunity to be the head coach at Central Michigan team. In the same year, Central Michigan University got victory over a rival team, Western Michigan for the first time since 1993. He also led CMU to earn MAC title at Ford Field against Miami in Detroit.

In addition to that, team CMU earned a trip to a third consecutive Motor City Bowl. In 2009, under his guidance, he won against Ohio in the MAC title game at Ford Field where he left CMU with a 27-13 overall record and 20-3 MAC record.

Jones became a head coach at the University of Cincinnati on December 16, 2009, replacing Brian Kelly. He was named Big East Coach of the year after he led the team to achieve Big East Championship and a Liberal Bowl victory. On December 7, 2012, he announced his resignation to join the University of Tennessee as head coach. After his announcement, he paid $1.4 million to buy out his Cincinnati contract extension which went through season 2017. Before Jones, Derek Dooley was head of the coach.

Butch Jones joined the University of Tenessee on December 7, 2012. Tennessee under his coaching earned its 800th victory and became the eight school to reach a plateau after Michigan, Texas, Notre Dame, Nebraska, Ohio State, Oklahoma, and Alabama. His first significant win was over the eleventh ranked Carolina Gamecock on October 19, 2013. Again, on November 1, 2014, he led his team to achieve victory against the South Carolina Gamecocks on November 1, 2014. It was named Jones second signature win. 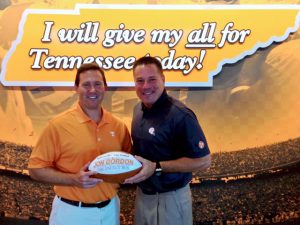 In 2015, Jone also led his team to beat Georgia after five years which was called his third significant win. On December 30, 2016, he led Tennessee to a 38-24 victory over Nebraska in the 2016 Music City Bowl.

There is no any information about the past relationship of Butch Jones, But he is a married man and lives a peaceful life with his beautiful wife, Barbara Jones. He married his long-term girlfriend, Barbara and is blessed with three children, Alex Jones, Adam Jones, and Andrew Jones. 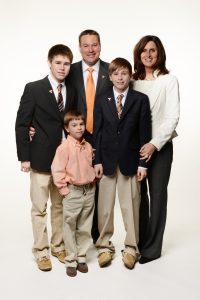 In an interview, he revealed his love story on how they meet and how they managed to live in a long distance relationship. According to him, he met Barb at Ferris State University in Grand, Rapids, Mich. They were in the same batch during the spring semester and started dating by the early part of the following fall semester.

He added, they were in long distance relationship for two and half years while he was in struggling phase of career and Barbara was an intern in New Jersey. He said he can never forget those days when his wife used to work two jobs to raise his eldest son. According to him, she is not only his wife but also his best friend.

The couple loves shopping together and often goes for a long drive. They are now living luxurious life together in the United States with their three sons. So far we don’t see any divorce related rumors in their married life.

Achievement and Net Worth

Jones is currently working on the University of Tennessee as a head football coach. His previous works include coaching for Cincinnati and Central Michigan University. While in Cincinnati, he won four conference championship in his seven seasons including Big East Title from 2011 to 2012. In 2011, he received Big EastConferencee Coach of the Year honors from the league1 after his 10-win season with Bearcats. Also, he received   “Coach Of the Year ” award from CBSSports.com in 2012.

All in all, the respected Butch Jones has earned name and fame due to his dedication towards work. As a head football coach, his salary is $3.085 million annually. As of 2017 his estimated net worth is reported to be around $15 million.