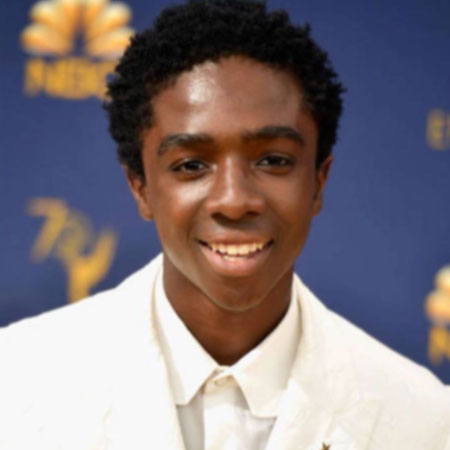 Most of the girls have a crush on him and day-by-day, his fans following are rising up. He is too young to get involved in love affairs although he might be dating his girlfriend secretly.

Caleb Reginald McLaughlin aka Caleb Mclaughlin was born on 13th October 2001 to an April McLaughlin and Corey McLaughlin with two other siblings in the city of Carmel, New York. He holds the citizenship of the United States and belongs to black-American ethnicity.

He learned dance nearly for a year in NY and went to The Harlem School of Arts under the former The Lion King’s original cast, Aubrey Lunch. Before this, he also attended Kent Primary School and then at George Fischer Middle School for a year.

This young and talented guy stands 5 feet 5 inch tall with the athlete body. This Libra star has got black stirring curly hairstyle with the dark black eyes. He is interested in playing basketball and played in the NBA All-Star Celebrity Game on the East team.

Caleb McLaughlin does not belong to acting family background and never thought of being an actor. But later, he gained interest in the acting field and played the role of Noah in a short movie, Noah Dreams of Origami Fortunes in 2012.

Who knows, this little boy gonna be the leading actor in his coming days. The following year, he made his TV debut from Dick Wolf’s created American police procedural, Law & Order: Special Victims Unit.

Next, he appeared in drama series like Unforgettable, Forever, What Would You Do?, Shade of Blue and few others. After receiving huge recognition in a very short period of time, Caleb made a lead role of Lucas Sinclair in American science fiction horror web TV series, Stranger Things, created, written, directed and co-executive by the Duffer Brothers in 2016.

In the TV drama series, he shared the screen with Winona Ryder, David Harbour, Millie Bobby Brown, Gaten Matarazzo and few others. It aired on Netflix which was one of the popular TV series among the viewers.

He earned his first award Screen Actors Guild Award and NAACP Image Award from the same TV series, Stranger Things. Also, he received the nomination for Young Artist Awards, BET Award and Screen Actors Award for his role in the drama play.

Besides his acting in the TV series, McLaughlin has been featured in the music video Santa’s Coming for Us of Sia and Jimmy Fallon’s Golden Globes 2017 Opening of Jimmy Fallon. Also, he has played the role of Young Simba in the musical Disney animated movie of the same name, The Lion King.

YouTube: Caleb McLaughlin featuring in Coming for Us of Sia;

Further, he was last seen playing the role of Ricky Bell in the American biographical three-part miniseries, The New Edition Story which was directed by Chris Robinson.

As per the sources, Caleb McLaughlin current relationship status is single and there is no such news regarding his love affairs and rumors. But looking at his Instagram account, we can see his several pictures with the lady friends. Who knows, one of them might be his girlfriend.

After several appearances in the successful TV drama series, Caleb McLaughlin has successfully won the heart of millions of fans. As per the sources, many girls have a crush on him and day-by-day, his fans following on his official Instagram is rising up.

Caleb McLaughlin has not only earned name but also received a decent amount of fame throughout his acting career. As per the sources, he charges around $30,000 per episodes form the TV drama series, Stranger Things. Altogether, he has an estimated net worth of $0.7 million in 2018.

Caleb has certainly set an example being a child actor to everyone and has got a bright career in his near future and might get an entry in the Hollywood industry as well. Now, he lives a luxurious lifestyle which he earned from his acting profession. Likewise, he is to return in the season 2 of the Stranger Things, in 2018.