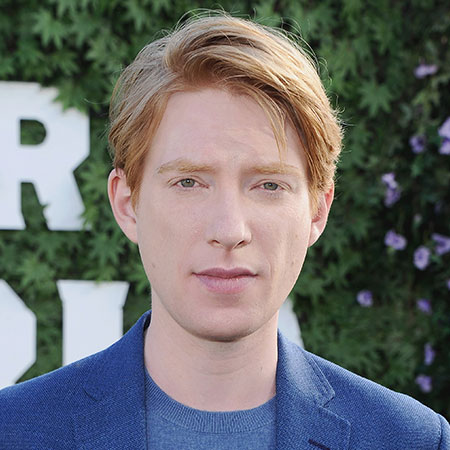 Domhnall Gleeson is an actor and writer who is internationally recognized for his role Bill Weasley in the film, Harry Potter, and the Deathly Hallows. Likewise, he also portrayed a role of General Hux in Star Wars: The Force Awakens.

Domhnall Gleeson was born on 12th May 1983, in Dublin, Ireland to Brenden Gleeson, and Mary Gleeson. His father is an actor and film director. Similarly, he is the oldest brother of Brian, Fergus and Rory Gleeson. Regarding his nationality and ethnicity, he is white Irish.

Domhnall first completed his education at the Malahide Community School. At Malahide, he performed in school productions such as King Lear and Grease. Later on, he joined at the Dublin Institute of Technology and graduated with a Bachelor of Arts in Media Arts.

One of the prominent actors of Starwars, Gleeson started writing and directing for both stage and films right after his graduations. Being passionate about the film industry, he later decided to make his acting debut.

Gleeson made his acting debut in the Miniseries Rebel Heart in 2001. After four years of onscreen debut, he then got chance to appear on the big screen. He appeared in the film Boys Eats Girl where he played a role of Bernard.

Afterward, Gleeson made an appearance in the Broadway theatre show The Lieutenant of Inishmore for which he received a Tony Award nomination. Likewise, he appeared in productions of American Buffalo and an adaptation of Great Expectations at the Gate Theatre in Dublin.

Some of his films and television series credits include

More recently, Gleeson appeared in the movie such as American made, Star Wars: The Last Jedi, Goodbye Christopher Robin. Moreover, he also made an appearance in television series, Catastrophe. His new upcoming movie, The Little Stranger, and series, Psychic is releasing soon.

The 34 years old actor, Domhnall has been keeping his personal life under the radar. However, he was rumored to be dating Irish producer, Juliette Bonass. They were spotted together around Disneyland in Anaheim.

Though they were hanging out, neither of them confirmed about their relationship. Likewise, they have not been spotted together since that day. Currently, he appears to be living a single life. Besides, he seems to be working on his onscreen career.

Domhnall Gleeson makes a good amount of money from his acting professions as well as writing. As of now, he has appeared in the multiple numbers of films. Besides, he has also won many awards which have helped him to boost his net worth.

Allocating information from several sources as of 2018, it is found out that Domhnall Gleeson current estimated net worth is around $7 million.