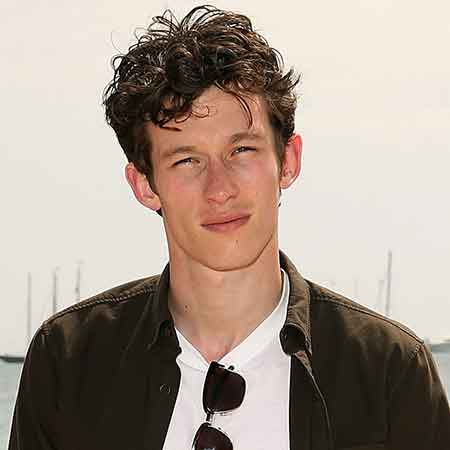 Callum Robilliard Turner is an English actor and model who is widely perceived for portraying a role of Bill Rohan in the British drama film, Queen, and Country. Besides, he is one of the pre-eminent actors of Eli in E4 series, Glue.

The 28 years old actor and model, Turner is currently in the relationship with girlfriend, Vanessa Kirby. Callum Turner and Vanessa have been dating each other for two years. The couple recently admitted it. They seem to be very happy with their relationship.

Callum Robilliard Turner was born on 15th February 1990, in London, England and grew up in Chelsea. His middle name is after British poet and contemporary artist, David Robilliard who was a close friend of his mother. The talented and handsome actor is a big supporter of Chelsea Football Club. Regarding his nationality, Turner is British and is of white ethnicity.

Turner first started his career as a model in 2010. In the beginning, he worked for the modeling companies including Next Pic and Reebok. A year later, he then moved into acting. His first onscreen work was for the short film, Zero where he portrayed a role of Tony. In the same year, he also made an appearance in the theatre play, The Colour of Home as Charlie.

Turner’s gained a limelight at a very short period. Giving most of his time on his acting career, he then appeared in television series comprising, Leaving, The Town, Ripper Street, Glue, War, and Peace. Some of his other onscreen works include Queen and Country, Green Room, Assassin’s Creed, Mobile Homes, The Only Living Boy in New York and so on.

Youtube: Callum Turner discussing his film The Only Living Boy in New York;

In October 2014, Collum Turner was selected as one of the 18 members from TV, film, and gaming industries to receive the Breakthrough Brits Award. The program was arranged by the British Academy Film Awards to recognize and further develop the skills and Careers of a new actor.

Callum Turner who did modeling for Next pic and Reebok is currently dating the British actress, Vanessa Kirby. Vanessa Kirby is better known for portraying a role of Princess Margaret in the hit Netflix drama, The Crown. Reportedly, Vanessa was rumored to engage with an American actor, Tom Cruise. However, she admitted it as a zero truth.

Callum Turner makes a decent amount of money from his acting career. In addition, he has increased his net worth working as a model. Allocating information from several sources as of 2018, his estimated net worth is around $1 million.

Despite being one of the renowned British personality, Callum has kept himself away from social networking sites like Instagram. Because of this, it has made hard to know detail about his daily lifestyles including cars collection and houses.