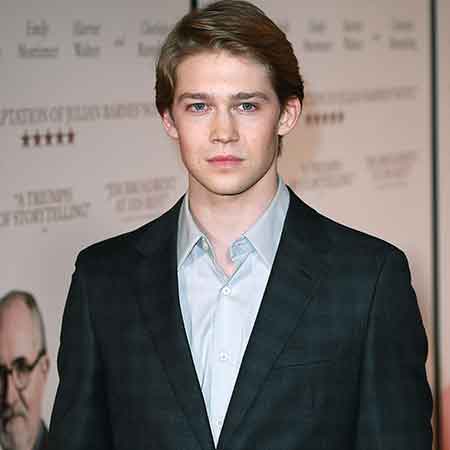 Joseph Matthew Alwyn, better known as Joe Alwyn is a British actor who is popular for the film Billy Lynn’s Long Halftime Walk. The actor began his career in 2015. He is still at the beginning of his career with a limited number of screen appearances. Nevertheless, Alwyn has risen into popularity.

A native of North London, United Kingdom, Joe Alwyn was born on February 21, 1991. His mother is a psychotherapist while his father is a documentary filmmaker. Alwyn was raised either in Crouch End or Tufnell Park neighborhood of London. He has two brothers, Thoms Alwyn and Patrick Alwyn. Regarding his nationality, he is British.

As for his education, Alwyn attended the City of London School. He was an introverted child and had a dream of becoming an actor. So, he joined National Youth Theatre in his late teens. Furthermore, the actor graduated from Univerity of Bristol in literature and drama in 2012. He then got his Bachelor of Arts Honors degree in acting from Royal Central School of Speech & Drama.

During his days in the University of Bristol, Alwyn acted in two students productions at the Edinburgh Fringe Festival. In early 2015, the actor was cast in the lead role of Ang Lee’s war film named Billy Lynn’s Long Halftime Walk alongside Kristen Stewart. The movie was released in 2016.

Furthermore, the actor starred in a supporting role in the British drama film, The Sense of an Ending in 2017. Alwyn also had a modeling gig with Vogue for their 2016 September issue alongside Gigi Hadid.

Alwyn is now set to appear in numerous movies in 2018. He has been cast in upcoming movies Operation Finale, Boy Erased, The Favourite, Mary Queen of Scots. We can expect to see more of him in the theatres soon.

The 27-year-old is in a relationship with longtime girlfriend, Taylor Swift. Joe and his girlfriend have been together since October 2016. They have a relatively private relationship.  The two are speculated to have met back in 2013 Met Gala ball. At the time, Swift’s breakup with Calvin Harris was not confirmed yet.

They began dating around May in 2017. The pair was spotted together for the first time in Nashville after Swift’s separation with Tom Hiddleston. The two has since been going strong. There have been no rumors of their separation so far. Swift has also written some songs about him like Call It What You Want To, Gorgeous.

Aside, Alwyn is a family man. He shares a close bond with his parents. He still lives with them.

The actor is still at the start of his career. With only two movies under his belt, Alwyn has not earned a lot of money as of yet. He has an estimated net worth of $250,000. Furthermore, the source of his income is his acting jobs.

Nevertheless, Alwyn is active in his career. He has many more movies coming out. So, we can expect to see a rise in his net worth.