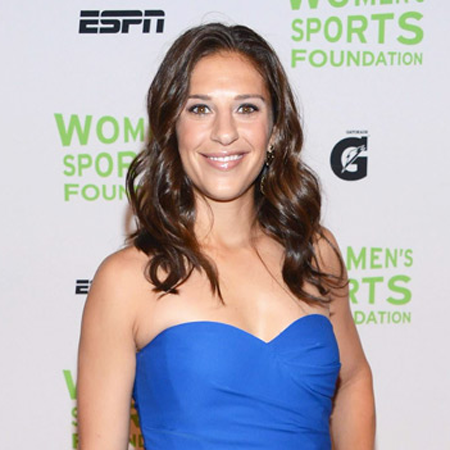 Two times Olympic Gold Medalist and FIFA Player of the Year, Carlin Lloyd is an American soccer player who plays for Sky Blue FC club in the National Women’s Soccer League and the United States women’s national soccer team. She represented her country thrice time in the FIFA; 2007, 2011, and 2015 FIFA Women’s World Cup.

Well, Carli Lloyd is in a married relationship with a golf pro, Brian Hollins, since November 2016 and enjoying their marital relationship since then.

Carli Anne Lloyd, better known as Carli Lloyd is a daughter of Pamela and Stephen Lloyd. She was born on 16th July 1982 in the city Delran Township, New Jersey, U.S. She is a sibling sister of Ashley Lloyd and Stephen Lloyd.

She did her schooling from Delran High School and used to play soccer at the age of 5. Since then, she has an exceptional ball control and skill as a midfielder.

During the year 1999-2000, as a youth player, Lloyd received numbers of titles such as Girl’s High School Player of the Year, Star-Ledger All-State First Team, Courier Post Player of the Year and South Jersey Soccer Coaches Association (SJSCA) Midfielder of the Year.

Later, she attended Rutgers University for her higher education but her journey in soccer never stopped. There she played for Scarlet Knights women’s soccer team under the head coach, Glenn Crooks.

This young and beautiful soccer player had a remarkable performance as a fresher; as she was leading scores with 15 goals with 37 points in her first season which made her received Soccer American’s All-Freshman Team and Big East Rookie of the Year honor. At the final year of her college, she scored 10 goals and one assist and was named 2004 Big East Midfielder of the Year.

Instagram: Carli Lloyd in her youth career with her teammates;

Standing 5 feet 8 inch tall, Carli has had already established herself as one of the top soccer players holding different titles in her schooling and college days. Her journey in the soccer began with Central Jersey Splash for the W-League, since 1999. And then, New Jersey Wildcats in 2004, where she shared her skills with Manya Makoski, Tobin Heath, Kelly Smith and Heather O’Reilly.

Carli is equally focused on her league and international games. She represented her country United States at the under-21 international in the Youth National team. Being a member of under 21 teams, she played and won the Nordic Cup four times that was held in Finland, Denmark, Iceland, and Sweden, from 2002 to 2005.

As a senior player, Carli made her debut against Ukraine for the United States women’s national soccer team through her first international goal was against Taiwan, on 1st October 2006.

In the year 2007, Carli made her first Algarve Cup and FIFA Women’s World Cup tournament where she got an opportunity represent her country where she had 9 goals and 3 assists which ranked her third on her team.

Besides soccer career, Carli is well known for her appearance in numerous TV shows like Good Morning America, The Daily Show with Jon Stewart, Live with Kelly and Michael, Late Night with Seth Meyers, and so on.

Not only in this, she was featured on the cover page of popular magazines like Glamour, Sports Illustrated, and Shape magazines. Along with her teammates, they were also featured in the EA Sports’ FIFA video game series, based on FIFA 16.

Instagram: Carli Lloyd featuring on the cover of magazine;

Further, she endorsed famous brand like Nike, Beats By Dre, Kind, NJM Insurance and established herself as a brand ambassador for Lifeway.

She has established herself as one of the renowned personality in the history of America such as Serena Williams, Alex Morgan, Chris Evert after winning countless awards and achievements.

Carli has received several awards and a great honor for her hard work and struggle. She received her first award Algarve Cup Most Valuable Player in the year 2007. The following year, she received U.S. Soccer Athlete of the Year 2008.

In FIFA tournament 2015, she successfully won FIFA Women’s World Cup Golden Ball, Silver Boot with FIFA Women’s World Cup Goal of the Tournament. Their success was enjoyed throughout the United States after being first women’s sports team to be honored by a ticker tape parade in New York City. The same year, her team was honored by former President Barack Obama at the White House.

Talking about Carli Lloyd’s relationship, she is married to golf pro-Brian Hollins, on 4th November 2016, which was held in Puerto Morelos beach, Mexico. Currently, the husband and wife live in the luxurious house situated in Mount Laurel, New Jersey. It’s been a year the duo got married but till yet, they do not share any children.

As per the sources, Carli Lloyd salary is around $70,000 annually. Altogether, she has an estimated net worth of $0.8 million which she earned from her profession, endorsing brands, featuring in magazines and awards as well.

There is no doubt she enjoys a lavish lifestyle with her husband in the city of New Jersey. She owns a number of Audi car in her cars collection.