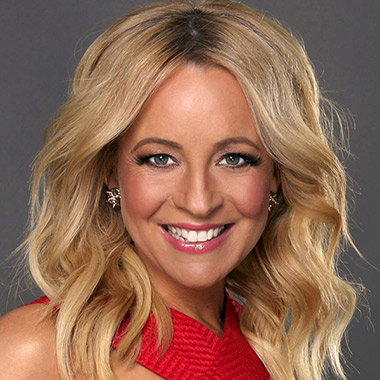 Carrie Bickmore is an Australian radio and television presenter, who won the Gold Logie Award for best new female talent. She Currently presents “The Project” on Network Ten in weeknights.

Bickmore was born on December 3, 1980, in Adelaide, Australia but moved to Perth with family when she was still a child. She attended Anglican girl’s school and studied journalism at Curtin University of Technology and graduated in 2000. She pursues her career in Melbourne.

Brickmore’s first news reading career begin on 92.9 FM in Perth where she was an emergency fill in for a sick colleague and later on she was selected as a regular newsreader. Brickmore was the afternoon news reader for radio station Nova 100 in 2001 and co-host of the drive show in 2002 with Andy Ross.

Brickmore was breakfast newsreader on Nova 100 for the show Hughesy & Kate from 2007 to 2009 but she leaves Nova 100 in September 2009 to focus on 7PM Project. She was the Ambassador for L’oreal Melbourne Fashion festival.

Bickmore and Charlie Pickering became the part of the show “The Breakfast Project” in 2012 where they impressed both critics and fans. The show was aired for three weeks nationally. On November 2013, she read news for Nova 100 to say goodbye to Hussey and Kate who were the host of the long standing breakfast show.

Brickmore was presented in the show “Rove Live” in each episode at the segment “Carrie @the News Desk” which was about real events but ends with humor. Bickmore has a more important role on this show from 2007. Bickmore has been presenting on “The Project” on Network Ten since 2009. She won the Logie Award for “Best New Female Talent” in 2010 for working on Rove Live and The 7PM Project.

Carrie Bickmore promoted McDonalds on The Oprah Winfrey Show in December 2010 and following the event she was criticised by The Drum’s editor Jonathan Green and representatives of Australian Cofee Industry. She fronted the revamped version of “So You Think You Can Dance” alongside with former American Idol Judge Paula Abdul.

Brickmore is married to Greg Lange in 2005 and give birth to Oliver in 2007. Unfortunately, Greg died in 2010 because of brain cancer. After her husband’s death, she didn’t appear on television for several months but in 2011, she made a stint on The 7PM Project.

In 2005, Bickmore was nominated for “Best News Presenter”  in Australian Commercial Radio. She received “Best Community Service Project-Metro” on behalf of Nova 100.

Carrie was continuously nominated for  “Most Popular TV Personality” in 2012,2013 and 2014 for Gold Logie and was nicknamed Golden Girl of Network Ten. She was awarded Gold Logie Award in 2015 where she donned a beanie to raise awareness about brain cancer for her late husband’s struggle.

Brickmore was appointed as Cadbury Easter Ambassador and launched Cadbury’s Easter campaign and promoted donations for Foodbank in Australia in 2012. She was announced UNICEF ambassador on November 2012.

Bickmore became the face of global beauty product brand Garnier in Australia in 2014. She was featured in many advertising campaigns for Garnier Cream and hair color. This made her a good net worth.?