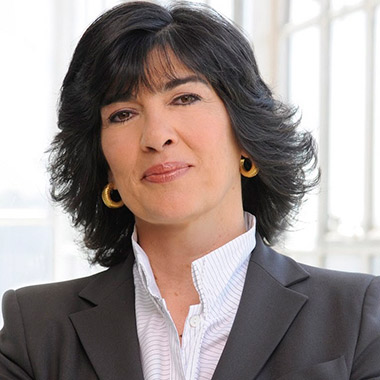 Christiane Amanpour is a famous British-Iranian journalist born on January 12, 1958, in London, England. She is a television host and Chief International Correspondent for CNN and hosts the nightly interview program Amanpour in CNN International.

Amanpour was born in London but raised in Tehran and she is fluent in English and Persian. Her Parents are Patricia and Mahmoud Amanpour who was Muslim from Iran.

Amanpour was sent to a boarding school named Holy Cross Convent in Chalfont St.Peter, Buckinghamshire at the age of eleven. Before that, she was studying in Iran. At the age of 16, she attended New Hall School in Chelmsford, Essex.

Amanpour was hired by CNN in Atlanta, Georgia on the foreign desk in 1983 which was entry level desk assistant. Her first major assignment was to cover Iran-Iraq war and later she was transferred to Eastern Europe  to report the fall of European Communism 1986. Her reports about Persian Gulf War make her well-known face. She often considered as fearless for reporting news from many conflict zones and Bosnian war and Seige of Sarajevo.

On March 2002, she interviewed Yasser Arafat live on the telephone which was one one of the memorable moment in her television career.In late 2013 Amanpour pushed the case of Syrian Crisis as an expert and appeared in several programs and pushed Obama Administration line for War.

Amanpour is the Member of Center for Public Integrity, International Women’s Media Foundation, Committee to Protect Journalist and Institute For  War and Peace Reporting.

Amanpour is married to former US Assistant Secretary of State and spokesman of US State Department James Rubin. The couple has the son Darius John Rubin (2000) and they are living in London.

Amanpour has various media and screen appearances like Gilmore Girls, Harper’s Bazaar as well as in Iron Man 2 and Pink Panther 2 where she played herself as a news reader. She voiced the character Enheduanna in Cosmos: A Spacetime Odyssey.

Forbes Magazine also named her as one of “The World’s 100 Most Powerful Women” list and she has a good net worth.