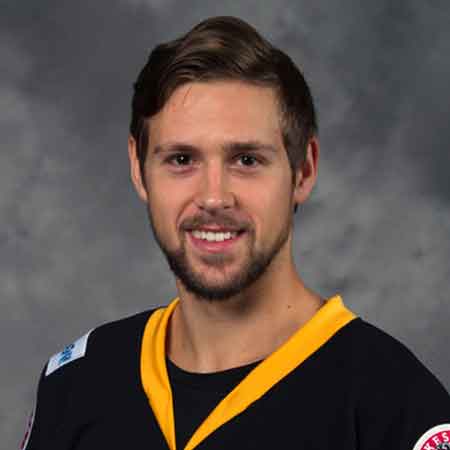 The American professional ice hockey goaltender, Casey DeSmith is currently playing for the Pittsburgh Penguins of the National Hockey League. He received the 2017 Harry “Hap” Holmes Memorial Award. He holds the record for most saves in playoffs for Wikes-Barre/Scranton.

The ice hockey player is currently in a relationship with Ellie Pikula. The two have been dating for a while. DeSmith has had some ups and downs in his personal as well as professional life. To know more about his life, career, education, net worth, assets; keep scrolling.

DeSmith was born on 13th August 1991, in Rochester, New Hampshire. His parents are Gary DeSmith and Patrice DeSmith. He also has two sisters. Regarding his nationality, DeSmith is an American.

As for his education, DeSmith attended the University of New Hampshire and pursued his bachelor’s degree in business studies at the University. He played hockey while in college. However, he was later suspended from the college team and dismissed due to his arrest for domestic abuse.

DeSmith began his career as a junior. He played hockey in the NEPSAC league for Berwick Academy from 2006 to 2008. After that, he played one season with Deerfield Academy. He later joined the Indiana Ice of United States Hockey League.

DeSmith then went on to play for The University of New Hampshire hockey team, Wildcats. He compiled a 9-10-1 overall record in the first season. He had a career-high 50 saves against Boston University in the Hockey East Quarterfinals. He was named the Hockey East-All Rookie team for 2011-12 season.

However, he was suspended from the team in 2014. He was charged with domestic abuse against his then-girlfriend. He reportedly punched and sat on the girl while appearing to be intoxicated. DeSmith pleaded not guilty and was sentenced to pay $124. He also was included in community service as a part of his diversion contract.

DeSmith then signed a contract with an ECHL team called Wheeling Nailers on 30th June 2015. He appeared in thirteen games with the Nailers posting 2.55 goals against average and 0.915 save percentage. He then played for the Nailers’ American Hockey League affiliate Wilkes-Barre/Scranton Penguins.

DeSmith won his first professional playoff game during the Calder Cup in 2016. He then set a Wilkes-Barre/Scranton record for most saves in a playoff game with 59 saves. He and partner Tristan Jarry became the best goaltending tandem in AHL during the 2019-17 season.

He then signed his first NHL contract with the Pittsburgh Penguin. He played alongside Patric Hornqvist, Justin Schultz, Derick Brassard. He played his first NHL game on 29th October 2017, against the Winnipeg Jets when starting goaltender Matt Murray was pulled out by the coach in the first period.

Casey DeSmith is not a married man. However, he is in a relationship with Ellie Pikula who resides in Pittsburgh. It is unknown when the two exactly started dating. It seems they have been together for some time. Ellie is supportive of DeSmith’s career.

The two have shared many photos of each other on their respective Instagram page.

The net worth of Casey DeSmith is currently under review. He reportedly has a salary of $700,000 annually. His Pittsburgh Penguins contract was valued at $650,000 per year. He owns a gold 1998 Toyota Celica. The player lives a comfortable lifestyle.