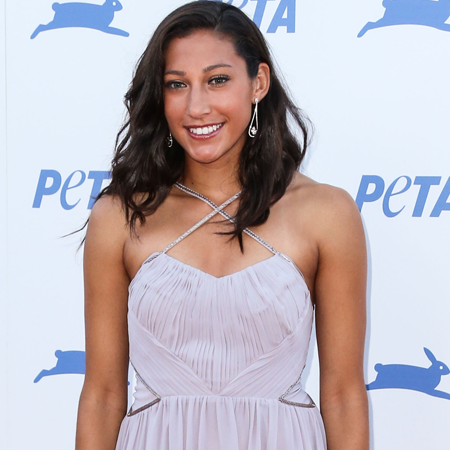 Christen Press is an American soccer player who played as a striker for the team United States and Houston Dash. She broke every offensive record in woman’s football history and was able to crawl her way up to FIFA Women’s World Cup champion.

Concerning about her personal life, Press hasn’t disclosed much about her affairs and boyfriends. Even though she is seen hanging out with her guy friends she hasn’t officially announced anything regarding her relationship till the date.

Christen Annemarie Press most known as Christen Press was born on December 29, 1988, in Los Angeles. She was raised by her father Cody Press and mother Stacy Press in South Bay city of Palos Verdes. She grew up along with her sisters Channing and Tyler.

Press went to Chadwick School and did her graduation from Stanford University. She was an active child and used to play soccer at an early age of five. Later, she went on to play in her high school and University as well.

Pursuing her dream career, Press joined Slammers FC giving start point to her profession. Later she started playing for Chadwick Dolphins as a captain and helped the team to garner the two Southern Section Division IV titles. Christen then continued her career in Stanford Cardinal playing for Stanford Cardinal women’s soccer team. She tallied 71 goals within her 98 total games for the team.

Press was the alternate player in the 2012 Summer Olympics playing for the United States women’s national soccer team. She scored two goals on her first match and help the team defeat Scotland by 4-1. She was named Budweiser Woman of the Match followed by becoming the first woman to score three goals in her first two games.

In 2014, she joined the team Chicago Red Stars and became league’s goal leader in no time. She was named NWSL player of the month having scored four goals in April winning against Portland Thorns FC. The same year she helped U.S team qualify the championship game winning over Argentina over 7-0 at the 2014 International Tournament of Brasilia.

In 2015, Christen got selected for the US national team for the World Cup and scored her first World Cup goal in the 61st minute against Australia. She helped the team gain the victory with 8 goals and an assist in 249 minutes of playing time. She was then placed 2nd in the teams 2015 scoring list after Carli Lloyd. She started playing for Houston Dash since January 18, 2018.

Christen has accomplished a lot throughout her career. She was honored with the title NSCAA High School All-American and Parade Magazine All American in 2006. Likewise, she became two-time Southern Section Division player of the year, four-time Prep League Offensive MVP and the Pac-10’s Scholar-Athlete of the year for soccer. In 2010, she acquired Hermann Trophy while was given the Damallsvenskan golden Boot Award in 2013.

Apart from playing football, Christen has featured in commercial ads such as Nike, Coppertone, and Wheaties. She also made her appearance in the EA Sports’ FIFA video game series in FIFA 16 alongside her teammates. In 2015 she hosted FOX Sports @The Buzzer.

Moreover, Press modeled for a number of magazines such as Self, Howler, Shape Darling Magazine and Glamour. She also posed nude for The Body Issue magazine in 2016.

The talented player, Press is not only an amazing in her game, but she turns out to be an incredible actress as well. She gave her best performance in the popular animated sitcom The Simpsons followed by a short movie An Equal Playing Field.

Press is quite a secretive person when it comes to her love life and relationship. She hasn’t disclosed much information about her boyfriend but was caught up in the rumor of dating the guy, Nima Majd.

Christine was often seen hanging around with Nima. The duo also shared their quality time together via social media. However, they never made their relationship official neither confirmed the ongoing rumor. For now, she is possibly enjoying her personal life with extra focus in her career too.

Christen earns a lucrative amount from her career as a player. Her net worth is estimated to be $800 thousand.  She also earns a lot as a brand endorser for the companies like Hydrive Energy LLC Drink.

Besides football, she enjoys playing track and tennis. Her leisure time is mostly occupied with doing yoga and practicing. She also manages her time for friends as well as her family always appreciating the time she got to spend with them.