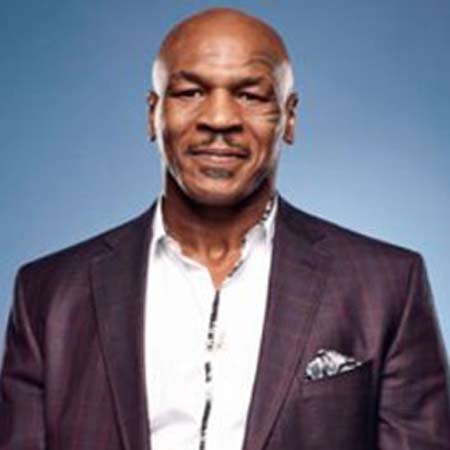 Michael Gerard Tyson, better known as Mike Tyson, is an American former professional boxer. He earned a huge name and fame after he won the world heavyweight championship at the very early of 20 and become the youngest boxer to do so. He has won several titles in his lifetime and has won most of the matches and holds WBC title, IBF title, WBA title and so on.

Although he achieved much more success in his career, he couldn’t succeed in his personal love life. Now, he is enjoying his marital life with his wife, Lakiha Spicer after two unsuccessful marriage with ex-wives, Robin Givens and Monica Turner.

Mike Tyson was born on 30th June 1966, to Jimmy Kirkpatrick and Lorna Smith Tyson. He grew up in the city of Brownsville, Brooklyn, New York. He has a sibling brother, Rodney, and sister, Denise, Unfortunately, she died at the age of 24 due to a heart attack.

He did his schooling at Tryon School, Johnstown near to one of the high-criminal neighborhoods which affected his behavior. As per the sources, he was arrested nearly 38 times for knocking out grown men at the very early age of 13.

Later, Tyson was discovered and trained by Bobby Stewart which leads him to introduced Cus D’Amato. During the period, he was attending Catskill High School in the daytime and practiced in the evening.

Mike Tyson has got a fearless attitude and courage which made him won gold medals at the Junior Olympic Games subsequently in the year 1981 and 1982. His success made him participate in the Summer Olympic where he competes the heavyweight gold medalist, Henry Tillman. He was defeated twice in the trials but it was one of the lesson for him which helped him become a professional boxer.

Then his dream turned into a reality in the year 1985, after he won 26 fights out of 28. For the first time, he was living like a king of the ring after winning the match one after another with contender David Jaco, James Tillis, Jesse Ferguson, Marvis Frazier and Mitch Green.

The same year, he lost his mentor, guide, philosopher and father figure man, D’Amato whose death changed his life. The following year, he debuted on TV fight against Jesse Ferguson and successfully won the competition.

Though he achieved numbers of title in the early days, his biggest achievement was to win World Boxing Council (WBC) heavyweight championship against Jamaican Canadian professional boxer and WBC heavyweight titleholder, Trevor Berbick and become the youngest heavyweight champion in the history; as he was just 20-years-old to hand over the title. The same year, in 1987, Tyson became the first fighter to win the WBC, WBA and IBF titles.

In the year 1988, Tyson parted from the manager, Bill Cayton and the following year, he participated in two of the match which he lost both the fights. His career downfall began since then; as he lost the match against Buster Douglas in an undisputed championship, in 1990.

His next match was against Evander Holyfield, the reigning champion at Caesars Palace in Los Vegas but he gave up due to his ribs cartilage injury.

Instagram: Mike Tyson after changing his religion to Muslim

Once he was alleged on a rape charge and got arrested with sentenced to six years followed by four years of probation in 1991, fortunately, he was released in the three years. During the time in prison, Tyson converted to Islam and changed his name as Malik Abdul Aziz.

Also, he is famous for his nicknames like Kid Dynamite, The Baddest Man on the Planet and Iron Mike.

Mike got released from prison in the year 1995 and made a comeback in the ring, in 1996 where he fought against, Peter McNeeley. The fight included 50 Greatest TV Sports Moments of All Time in 1998.

He also got an opportunity to fight against Lennox Lewis, the WBC, IBF, IBO and Lineal title holder but couldn’t defeat him. His fought against Kevin McBride before his retirement which he announced on 11th June 2005.

Besides his boxing career, Tyson did few of the endorsement and various boxing games in the Los Vegas. Not only this, he promoted websites, companies and began a tour exhibition to pay off his debt.

Also, he began appearing in the TV shows and movies; as he made his debut from the silver screen from the movie, The Hangover, and promote his Animal Planet reality series, Talking on Tyson.

Further, he launched his book, Undisputed Truth, which received The New York Times Best Seller of that time. He also published his second book called Iron Ambition in the year 2017 and began his own YouTube channel in collaboration with Shots Studio.

Currently, Mike Tyson is living a happily married life with his wife, Lakiha Spicer, to whom he tied a knot on 6th June 2009. The beautiful duo lives in Seven Hills, Nevada with his wife and two children; daughter Milan and son Morocco.

Before this, Tyson married twice; as he married an actress, Robin Givens in 1988 but due to his violent behavior she divorced him the following year.

Altogether, Mike has seven children from his three wives including a deceased daughter. It is said that his four-year-old daughter was found dead by his own 7-years old son, Miguel.

Mike Tyson Net Worth and Lifestyle

As of 2018, Mike Tyson has an estimated net worth of $3 million after spending and filing for bankruptcy, in 2003. Besides his money, he has got lots of properties in the United States and Brazil.

Currently, he lives a lavish lifestyle with his wife, Lakiha Spicer and two children in the Italian-style bungalow situated in Seven Hills, one of the golf course community in Henderson, Nevada which he brought in $2.5 million. It includes six-bedrooms, two detached casitas, an outdoor fireplace, lush landscaping, marble flooring and a grand entry. He owns a pet Tiger in his house.

During his journey in boxing, he was passionate about cars and has a collection of 1995 Rolls-Royce Silver Spirit, Range Rover, Jaguar E-Type, Ferrari Testarossa, BMW 850i, 1986 Lamborghini Jeep LM002 and few others. Moreover, he has keen interest having a tattoo and has got numbers of tattoos on his body including tribal tattoo right on his face.