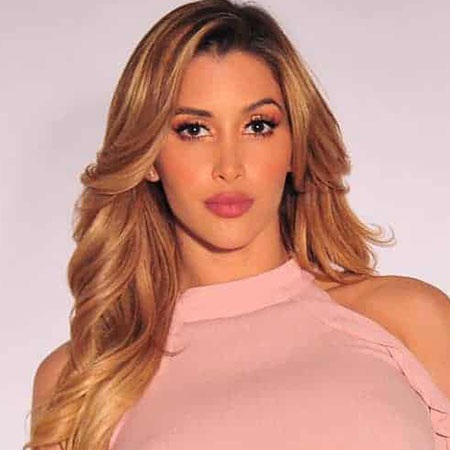 Claudia Sampedro is a successful model, who focuses mostly on swimsuit and lingerie modeling. She has featured various magazine cover appearances and also appeared in Face 2 Face Magazine and Mixed Magazine. Moreover, she is mainly popular for featuring in the E! Reality show “WAGS Miami.”

Claudia Sampedro is in a relationship with Julius Peppers, a famous football player. The couple has been living together since 2014 and welcomed their child a son named Amaretto on 21st September 2015.

Claudia Sampedro was born on 27th October 1989, in Havana in Cuba. Both of her parents are of Colombian descent. At the age of six, her parents went to the USA for a chance at a prosperous life and to school their daughter. Regarding her education, she completed her bachelor degree in ‘cosmetology’.

Claudia didn’t want to waste any time making her way onto the modeling. She didn’t initially think about going into modeling though, as she had her kens set on a career in nursing. She worked for one of the most noted plastic surgeons in Miami.

Claudia Sampedro started her modeling career at the age of sixteen. At first, she joined up with agent/scout, ‘John Casablancas.’ She went on performing several modeling shows. Claudia Sampedro also got some advertising deals. She featured on the covers of magazines like “Face 2 Face Magazine” and “Mixed Magazine.” In 2011, she signed up with ‘Nutri Sups.’

Apart from modeling, she also featured in reality show, “WAGS Miami.” Consequently, the TV appearance made her more famous. During the reality series “WAGS Miami”, Hencha Voigt, the fitness model had stars in her eyes as she recalled dating Kaepernick, and even revealed that she wasn’t totally over him.

Hencha claimed that Claudia stole from her during the confrontation in Episode 2. That would explain why she still holds such a huge grudge against Claudia and why she got so emotional when recounting the boyfriend stealing story.

Claudia stated that she only met up with Hench’s partner one time, it wasn’t that serious, and she didn’t even know that Hencha had been dating him. According to Claudia, the whole drama over her stealing Hencha’s man is just a huge confusion.

Claudia Sampedro is in a relationship with Julius Peppers. Julius is a famous football player. The couple has been living together since 2014. The couple welcomed their child a son named Amaretto who was born on 21st September 2015.

The two also each have a child from a previous relationship. Currently, the lovely couple is living happily together with no sign of separation. However, Julius is not her first love, in fact, she was in a relationship with some other guy.

With him, she has a daughter named, Keana Skye. She was born in 2009. Bleacher Report revealed that Claudia was linked to Kim Kardashian’s ex, Reggie Bush. Even, she looks like Kim Kardashian.

Besides that, Claudia Sampedro faced the controversy in 2016 when Ashley Nicole confronted her for her butt-naked photo-shoot. Consequently, it created a significant buzz in the press.

Allocating information from several sources, as of 2018, her current net worth is estimated to be around $1 million. Claudia Sampedro has a huge number of social media followers. She has more than 1 million Instagram followers. And she has more than 166,000 Twitter followers and around 172,000 Facebook fans.