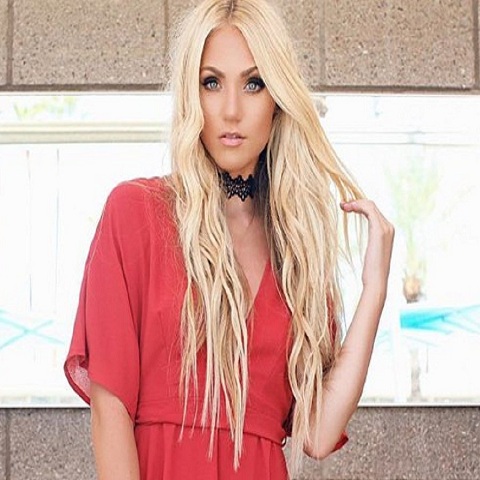 Savannah Soutas is an American Musical.ly Star and a social media personality, with more than 6 million followers in ‘savvsoutas musical.ly’ account as well as an Instagram Star operating in collaboration with Michelle Foley.

Savannah Soutas was born on March 2, 1993, to American parents in California, United States of America. Her mother’s name is Deborah Soutas. She was raised by her parents along with her sister named Chantelle. Her sister, Chantelle is a pop singer well Known for her solo singing and songwriting career, she first gained widespread recognization for being a member of the R&B girl group Flipsyde.

At the age of 19, she became a mother of a baby girl and which went on to be the reason for her to quit the education. Despite the hardship, she is currently pursuing a bachelor’s degree in the University and is working full-time as a photographer and fashion blogger. She enhanced successful after the birth of her daughter and by the time her daughter was two, life began to fall into place for her.

Soutas began to dance at the age of two and pursued her elementary education through homeschooling. Savannah enjoyed clicking pictures and had acted as a model in her teens, thus it wasn’t tough for her to start a career in photography. She would often take pictures of her daughter and post them online.

Savannah Soutas started her career as a social media star after she collaborated with the professional photographer Michelle Foley. She later launched her own website called ‘littleredrosephotography’. She spontaneously used to the uniqueness of the lip-syncing ‘Musical.ly’ app and uploaded many videos along with her three-year-old daughter, daily which further boosted her fame.

In 2016, she earned a huge number of followers owing to Everleigh’s adorable presence and her creativity, and became the most viewed and followed ‘Muser’ that year. Moreover, she began blogging about fashion in 2016 and eventually created a ‘YouTube’ account with her fiancé Cole. She along with her fiance created a ‘YouTube’ channel with called ‘Cole&Sav’ in 2016, where she has 1.7 million subscribers on their channel and has over 151 million views until now.

She partnered with Michelle Foley and her four-year-old daughter, Ava Foley, to create an ‘Instagram’ account for Ava and Everleigh called ‘Forever and Forava’ where the two little girls create their own fashion statements, where two kids models for various brands and products and sets new style trends for little girls.

Soutas is happily married woman and mother of one child. She got married to Cole LeBrant on 22 January 2017. She met Cole LaBrant, the prominent Vine star from the group/collaborative channel ‘Dem White Boyz’ in 2016. The couple got engaged shortly and shortly after their engagement the lovebirds tied the knot.

Savannah Soutas is blessed with a daughter named Everleigh Soutas, from her happy married life. Everleigh was born on December 14, 2012. Just like her mom, Everleigh is also a child fashion icon. The fashionista on Instagram shares an account called ” foreverandforava” with her friend Ava Foley.

Being a sensational star, Savannah Soutas works with numerous fashion brands and many brands endorse her as well. Therefore, with the help of her abilities and appearances, she receives a decent amount of money. As of 2017, her estimated net worth is reported to be around $5 million.