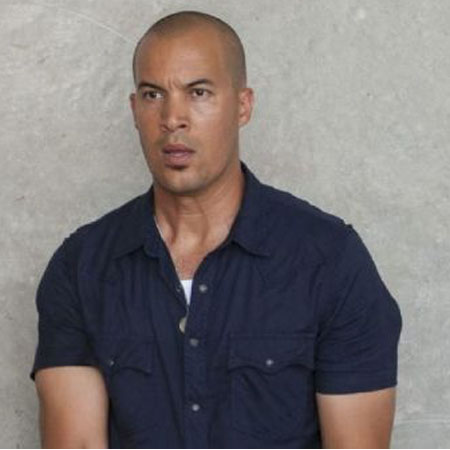 A renowned actor who is mainly known for his role as Jesse Porter on the USA Network original series, Burn Notice is Coby Bell. Similarly, he also portrayed the role of professional football player Jason Pitts on the comedy-drama series, The Game and NYPD officer on the NBC drama, Third Watch.

The talented actor is married to his beautiful girlfriend, Aviss Bell. The husband and wife have four children from their relationship named; Serrae, Quinn, Jaena, and Eli Bell.

Coby Scott Bell was born on 11th May 1975, in Orange County, California to an African-American father, Michel Bell and Caucasian mother. Coby is American and is of mixed descent.

Instagram: American actor, Coby Bell along with his father and big brother.

#TBT My Dad getting ready to sing the national anthem at an Angels game. He used to bring my big bro and me down on the field him.

Bell completed his education from the San Jose State University before starting his career as an actor. At the beginning of his career, he appeared in a variety show which includes; The Parent Hood, Smart Guy, ER, and Buffy the Vampire.

After working eight years for the series, he finally made a film debut in 2005, Dream Street. Similarly, a year after the film debut, he co-produced and starred in an independent film, Drifting Elegant. In addition, he also appeared in the films; Showdown at Area 51, Ball Don’t Lie, and Flower and Weeds.

Bell gained a huge attention after appearing in the series, The Game as a role of Jason Pitts. Afterward, he appeared in multiple television series such as CSI: Miami, Archer, Burn Notice, Hot in Cleveland, and Mad Dogs.

Besides acting professions, Bell is also a songwriter and musician for a reggae band. On the other hand, he was also a mentor to underprivileged in the non-profit organization, Big Brothers Big Sisters of America. Recently, he has appeared in the series, The Gifted as Jace Turner.

Youtube: Short interview with Coby Bell and other Gifted actors, Amy and Stephen.

Aged 42, Coby Bell is happily married to his longtime girlfriend, Avis Bell. The couple exchanged the vows in 2001. The husband and wife are blessed with four children, two sets of twins named Serrae, Quinn, Jaena, and Eli Bell.

Instagram: Wife and Husband, Avis and Coby on their 14th anniversary.

The couple has been living together for approximately 16 years and till now, they have kept their relationship very strong. Besides their relationship, none of them have involved in extra affairs. Moreover, there is no any information regarding their separation or divorce issues.

Handsome and hardworking actor, Coby has appeared in multiple series and films till the date. From there, he has collected the decent amount of money. Allocating information from several sources as of 2018 it its found out that his current net worth is around $2 million.

Besides this, Coby has been actively working in the field, thus there is no doubt that his net worth will increase in coming days.