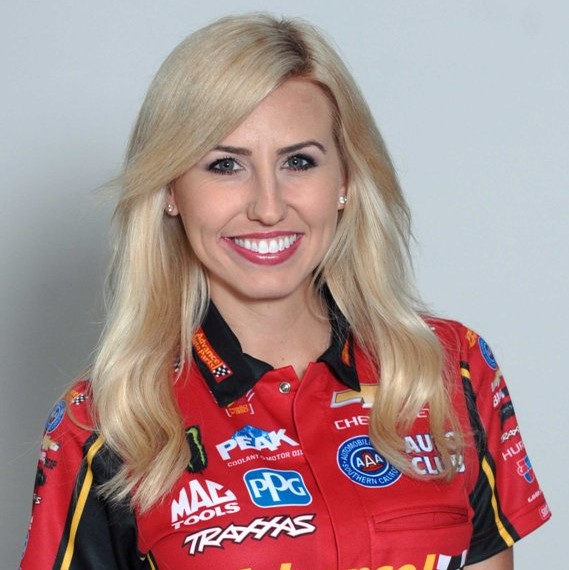 Courtney Force is a Funny Car drag athlete. She is well known for winning the 2009 NHRA Northwest Nationals. Having the ability to drive a 10,000 hp Funny Car capable of zero-to-320 mile per hour speed up, she was featured along with her family on the reality show “Driving Force”.

Courtney Force is married to Graham Rahal and living a delightful life with him.

Born as Courtney Force-Rahal was born on 20th June 1988, in Yorba Linda, California, United States. She is the daughter of 16-time NHRA Funny Car champ, John Force, and Laurie Force. She grew up along with her three siblings named Brittany Force, Ashley Force Hood, Adria Hight.

Courtney Force attended Esperanza High School, where she used to work as a cheerleader. Courtney Force graduated from Cal State Fullerton with a degree in communications. Force trained at the Frank Hawley’s Drag Racing School and subsequently earned her driver’s license after graduation.

Force spent her a lot of time at Sonoma sitting in one of her dads Funny Cars getting used to the experience. Then, she got NHRA competition drivers license in 2005.

After getting an Alcohol-Fuel license in 2008, she began racing in Super Comp along with her sister Brittany, in 2008. Courtney Force reached the final round twice in 2009, at Seattle and Pomona, picking up the victory in Seattle.

She debuted her Funny Car at the 52nd annual O’Reilly Auto Parts NHRA Winternationals. In 2012, Force obtained her first FC race, by defeating Matt Hagan in the final round of The Northwest Nationals, at Washington. She converted the third woman to win in FC.

Courtney Force has accomplished more consecutive racing rounds in one event.Courtney Force was highlighted with her family on A&E’s reality show Driving Force.

Force is a happily married woman. She and her husband Graham Rahal since 2015 at Dos Pueblos Ranch in Santa Barbara, California. Her husband, Graham is an American race car driver. He is currently participating in the IndyCar Series with Rahal Letterman Lanigan Racing.

She arrived for their wedding in a 1929 Bentley, owned and driven by longtime Rahal family friend Bruce Meyer, a vintage and historic car collector and Petersen Automotive Museum board member. Courtney wore a dramatic Galia Lahav Haute Couture dress.

In 2012, Courtney won the Automobile Club of Southern California’s Road to the Future Award as the NHRA Rookie of the Year. She collected sufficient points to win the Top Alcohol Championship at the end of the 2009 season.

Courtney has appeared on the cover of Traxxas Magazine, Speed Sports News, National Dragster, Drag Racing Action and Autoweek over her career. Her estimated net worth has $4 million.