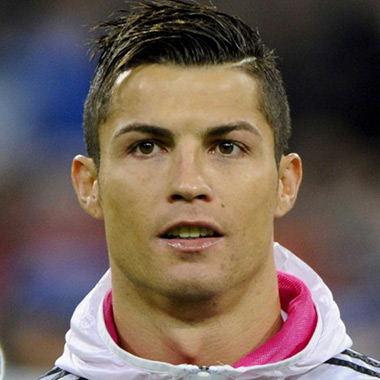 Cristiano Ronaldo, a famous professional football player was born on 5 February 1985. He is one of the best footballers in the world. He is a captain for Portugal and a forward. He has been ranked number one best player in the world many times. Cristiano has got great skills and high stamina.

Cristiano Ronaldo was born in Santo Antonio, Funchal, Madeira. He is the youngest child Maria Dolores dos Santos Aveiro and Jose Dinis Aveiro. Maria was a cook and Jose was a municipal gardener. His second name “Ronaldo” was given after his father’s favorite actor and then-US President Ronald Reagan. Cristiano has two older sisters Elma and Liliana Catia and one older brother Hugo.

Cristiano had a passion for football and at the age of 14, he entirely focused on football. He had potential and had good skill at that time to join a club and play semi-professionally. He joined Sporting CP and trained at the Academia Sporting in Alcochete. He played for Sporting’s under-16, under-17, under-18, B-team and was also the first team within one season. During that period, he had improved his gaming skills very much. In his league debut on 7 October 2002, he scored two goals for Sporting CP. They won the match 3-0 against Moreirense.

He was diagnosed with a racing heart at the age of 15. That might have forced him to quit playing football. He had a laser operation to cauterize the area of the heart that was creating the problem. He was admitted to the hospital in the morning and the surgery was done. He was discharged from the hospital on the afternoon of the same day and got back to his training in just a few days.

At the age of 16, Cristiano Ronaldo played from Sporting CP against Manchester United. Sporting won that match by 3-1. He showed such a good game and played so well, that the United players and the coach were very much impressed. It didn’t take long for the club to sign him for £12 million. It was a record for a player of his age to be paid that high. After joining ManU, he played in 2004 FA Cup Final and scored three goals for the team. It helped them to win the championship. Cristiano signed another five-year contract with the club in £31 million in 2008. In that year he played many games and scored many goals, which helped ManU to reach in the top position and also earned himself the FIFA World of the Year honor.

In 2009, Spanish soccer club Real Madrid signed Cristiano Ronaldo and paid ManU $131 million. It was a record that any football club paid for a player at that time. He was presented as a player of Real on 6th July 2009. He was given number 9 jersey. He played his first game for Real Madrid against Shamrock Rovers on July 21. Since then he has been at Real Madrid and has been giving the best in his game. He has earned FIFA World Player of the Year award, the Golden Boot, the coveted Ballon d’OR and has been named as the UEFA Club Forward of the year.

Cristiano Ronaldo has millions of fans all around the world and most of them are female. The reason of having many female fans is because of his good looks, hot body and his hair. He does different haircuts and hairstyles. He is one of the biggest sex symbols in this generation. We all know that he has a baby son but don’t know who is the mother of the kid. Recently it has been revealed that the baby’s mother is a British student who agreed to give up her rights to a child for £10 million. But later she said that she wants the baby back and is also ready to return the money. The mother got pregnant by Cristiano in a one night stand. According to the source, it is known that she has been calling him every day and is pleading for the child.

Having played in so many matches and won so many awards, there’s no doubt that Cristiano Ronaldo is one of the best players in the world. According to the source, Cristiano’s salary is €17 million, whereas his net worth is $300 million (2016).