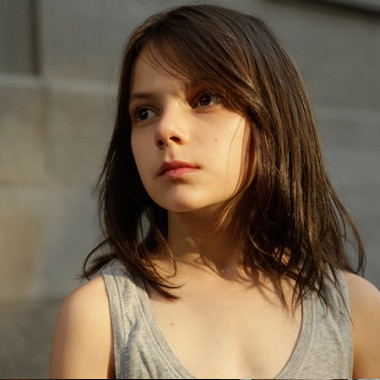 Dafne Keen is a Spanish-British child actress, famous for playing the role of Ana “Ani” Cruz-Oliver in the television series “The Refugees”, and mutant Laura (X-23) in the 2017 film “Logan”.

Dafne speaks both English and Spanish fluently. She enjoys ballet, singing, acrobatics and is an award-winning gymnast. Her ease with the language can be seen in this YouTube video from the set of one of her father’s TV series.

Daphne Keen Fernandez was born in 2005 in Spain. She grew up in an acting household between both the UK and Spain. Her father is a British actor, Will Keen, well known for his roles in the film Victor Frankenstein, as well as popular TV series Wolf Hall, The Musketeers and The Crown.

Keen started her acting career in 2014 along with her father, Will Keen with the Spanish BBC Worldwide co-production television series “The Refugees”, where she has played Ana “Ani” Cruz-Oliver, the daughter of the central family; her father Will’ played her on-screen dad. The series only continued eight episodes, both produced in Spain and the U.K.

It premieres in 2015 and is about a community trading with a growing number of refugees who come from the future and seek a safe place to live in the present. The series centers on their story, the story of Samuel, Emma, and little Ani. A change in their living after the arrival of a mysterious refugee, Alex, who has an unbelievable mission that shaped their lives.

She made her film debut the Wolverine sequel film”Logan,” where she played “ Laura Kinney”, x-23, a mysterious young girl who is the female clone of “Logan”. James Mangold served as a director whereas Scott Frank along with Michael Green co-wrote the screenplay. The first teaser trailer released on 20th October 2016, advertising the film as a very different kind of comic book movie than what we expect from a major studio.

It was theatrically released in the United States on 3rd March 2017, in standard and IMAX formats. It received praise from critics and audiences, with many calling it one of the best superhero films of all time.

Dafne speaks both English and Spanish fluently. She enjoys ballet, singing, acrobatics and is an award-winning gymnast. Her ease with the language can be seen in this YouTube video from the set of one of her father’s TV series.

Keen has an (unverified) Instagram profile, controlled by her parents, but she has yet to post any pictures on it. That hasn’t stopped over 2,000 people following her, though, presumably hoping she’ll drop Logan images once promotional obligations kick in.

This rising actress also has an (unverified) Twitter profile under the same username, where she refers to herself in her bio as an “actor and very creative mind”. She has tweeted little since she registered her name in July 2016 but has retweeted a Logan trailer as well as a photograph of a kitten posing with two ducklings.

Dafne earns a decent amount of money in her career. She has featured in some of the hit movies and TV series through which she obtains a good sum of money as salary. Allocating information from several sources as of 2018 it is found out that her current net worth is estimated to be around $ 300,000.

Dafne Keen is still active in her career and will be appeared in several movies and TV series by which her net worth will definitely increase.