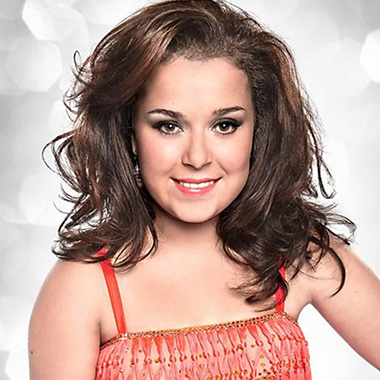 Dani Harmer is a beautiful English presenter, television actress as well as a singer. She is mainly known for The Story of Tracy Beaker, Tracy Beaker Returns, and Tracy Beaker Survival Files as Tracy Beaker. She also played in After You’ve Gone as Molly Venables. Dani was born on February 8, 1989, in Bracknell, Berkshire, England. Her birth name is Danielle Jane Harmer.

When she was six years old she made her stage debut in the musical The Who’s Tommy in the West End. She also has appeared in a number of pantomimes which includes Peter Pan, Dick Whittington, Snow White and the role in Cinderella alongside Joe Tracini. Harmer also appeared in a production of The Wizard of Oz. She also appeared in Harry Potter and the Philosopher’s stone as an extra. She did her big break as she got the role in dramedy series The Story of Tracy Beaker in which she starred in for five series. She also featured in full-length film Tracy Breaker’s Movie of Me. As a child, she went to Redroof Theatre School. She starred in The Story of Tracy Beaker, Tracy Beaker Returns, Dani’s House and Dani’s Castle which was beloved by a lot of children. She also appeared in other TV drama series which includes My Family, The 10th Kingdom, I’m Karen Taylor, Trial & Retribution, Pie in the Sky, Casualty, Beast, Coming of Age and Touch Me.

In early 2010, Harmer returned in the 13th episode Tracy Beaker Returns as Tracy Beaker. She then starred in a TV show called Dani’s Castle. In 2014 the second series was aired. The third series was also aired but not featuring Harmer. She then appeared on the celebrity game show Pointless with Joe Pasquale. The played for the charity Make A Wish Foundation. She along with her final reached the final but failed in winning the jackpot. She also appeared as a star in Disco Inferno as Jane. She currently plays in the stage production the Rocky Horror Show as Janet.

Under the management of Dani Glatman, Dani Harmer signed a record deal with Universal/Decca which worth 3 million euros. In 2008 the album was written as well as recorded. She was helped by songwriter and producer Tom Nichols. The album was entitled Superheroes. On May 25, 2009, the album’s lead and only single Free was released. The same song also became the theme song of the show Dani’s House. Unfortunately, the song became a commercial failure. Harmer also competed in the tenth series of the show Strictly Come Dancing in 2012. She teamed up with Vincent Simone. Unfortunately, the couple was eliminated on the final night.