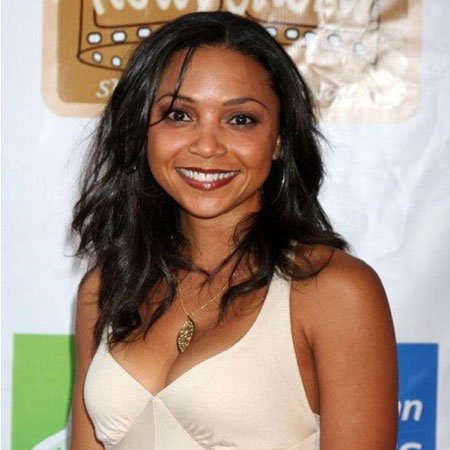 Danielle Nicolet is an African-American actress and voice actress. She is well known for appearing in the role of Caryn in the series, 3rd Rock From The Sun. Similarly, she is also famous for her incredible role of Jenna in the series, Born Again Virgin.

As of 2017, her net worth is estimated to be around $ 500 Thousand. As she is still working in the field, thus, her net worth will go higher in her coming days.

Talking about her personal life, Danielle Nicolet is a happily married woman. Her husband’s name is Mike Kussman, who is a builder and designer with SLTWTR Company. Her husband, Mike deals in luxurious furniture designs. Mike often accompanies her to events.

Danielle Nicolet was born on 24th, November 1973 in Ashtabula, Ohio, United States. During her childhood, she had an interested in acting and gymnastics. One of the renowned Gymnastics coach, Bela Karoli, spotted her and invited to train in Texas for the Olympic trials.

Later on, at the age of eight, Danielle Nicolet moved to Southern California with her family to train in gymnastics. But, after her knees went bad, she decided to change her track in acting.

Danielle Nicolet began her acting career at the age of 16, playing in the role of Vonda Mahoney on the television series, Family Matters from 1991 to 1992. Later on, Nicolet made her big screen debut starring as Debbie Luger in the movie, Loaded Weapon 1 in 1993.

With her co-stars on the set of Family Matters: TV Guide

Moreover, Danielle Nicolet landed the role of Caryn on the NBC sitcom 3rd Rock from the Sun in 1996. Nicolet also starred as Paula in the series Second Time Around from 2004 to 2005.

Apart from that, Danielle Nicolet is also voice character of TV series X-Men in 2011 and NFL Rush Zone: Season of the Guardians from 2012 to 2013. In 2014 Nicolet was nominated for a Behind the Voice Actors Award for Best Female Vocal Performance in Video Game in a Supporting Role for Saints Row IV.

Danielle Nicolet currently appears in the American superhero television series, The Flash. In the series, she is playing the role of Cecile Horton since 2015.