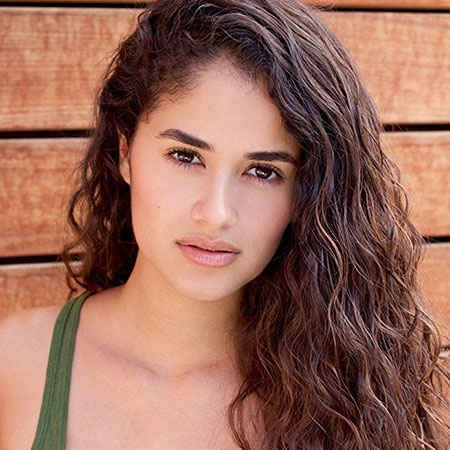 Danube Hermosillo is a rising Latin actress who is also the fresh faces in the Hollywood industry. She is famous for her role in the American romantic drama movie, Everything, Everything. She is also a social media sensational and day-by-day, her fan following on Instagram is rising on.

Well, this beautiful dimple currently single and not dating anyone. Rather than dating someone, she is focusing on her acting career.

Born on 5th November 1992, Danube Hermosillo grew up in Whittier, California. From the same city, she did her higher education and developed an interest in acting. Later, she moved to Los Angeles with her family and settled down.

This Scorpio star sign actress has got cylindrical physique with the height of 5 feet 5 inch tall. Her black color eye, lovely dimple, and long curly black hair increase the inner beauty of this lady.

During her higher education, she was active in athletic and was one of the parts of Soccer and track & field. She is also fluent in speaking Spanish.

Being passionate about acting, Danube lived her dream pursuing her career in the related field. She made her acting debut from the American television soap opera, The Bold and the Beautiful which was created by J. Bell and Lee Phillip Bell.

The TV series introduced her as Darlita towards the viewers. They have done over 7000 episodes until 2015. Next, she made her appearance in the American television mockumentary family sitcom, Modern Family, created by Christopher Lloyd and Steven Levitan, in 2009.

It aired on ABC original network that starred Ed O’Neill, Sofia Vergara, Julie Bowen, Ty Burrell, Jesse Tyler Ferguson and so on. She is also seen playing the role of Renee Acosta in Criminal Minds and Jasmine in Above the Line, which was directed by Luke Melman.

After playing several roles in TV series, she finally made her Hollywood debut from Stella Meghie’s directed American romantic drama movie, Everything, Everything.

The movie is based on the 2015 young-adult novel of the same name written by Nicola Yoon where we can love of smart and inquisitive girl Maddy having the illness to go outside the rooms of her house and a boy Olly, who wants to help her from the illness.

It was one of her successful hit movie that earned the overall collection of $61.6 million out of $10 million budget.

Talking about Hermosillo’s love life, she is currently single and not dating anyone: as she has never made her public appearances with any boyfriend. We can see several photos with the few of her friends but she has yet not confirmed either of them as her boyfriend.

Well, Danube Hermosillo is new to the Hollywood industry and making a decent amount of money from her acting. Although her net worth is yet not published in social media, looking at her luxurious lifestyle, she probably enjoys her net worth around six figures.

During her leisure time, she often visits through the world and shares her enjoyable moment through her official Instagram sites. She loves having pets and has got one pet dog in her house. Further, she owns a Stella scooter in her collection.