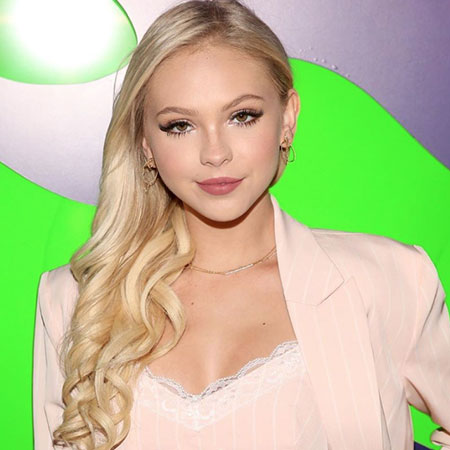 Jordyn Jones is a rising American dancer and singer, who rose to the fame after she made her appearance in the first season of the Lifetime dance reality series, Abby’s Ultimate Dance Competition.

Jordyn Jones was born on 13th March 2000, in Kalamazoo, Michigan, USA.  She is a daughter of Tim Jones and Kelly Jones who grew up in Studio City, Los Angeles with two other sibling brother, Skyler, and Casey.

Standing 5 feet 3 inch tall, Jordan developed an interest in dancing, especially hip-hop and began dancing in several school dance competition. Her zodiac sign is Pisces. She has got long blonde hair and hazel color eyes which increased her inner beauty. She belongs to white ethnicity and practices Christianity.

Bing professional, Jordyn Jones began her early career as a dancer is the part of The 5 LP’s group and began performing in the stage show. At the age of 12, she participated in the TV series, Abby’s Ultimate Dance Competition where she was one of the top competitors. Unfortunately, she finished 5th in the competition.

Though Jordyn made a breakthrough performance from the TV series, she was unhappy because she couldn’t make the finale. Next, she appeared in the dancing with the star Disney Channel’s Shake It Up and X Factor, which rose her fandom towards the viewers.

In the year 2015, she also danced in the Nickelodeon Kids Choice Awards and MTV Video Music Award.

Besides her dancing in the TV reality show, Jordyn made her appearance in the YouTube Red original movie, Dance Camp and sung her own songs including I’m Dappin, U Already Know, Fiyacracka and BRUH!.

Not only this, she has worked in numerous music video cover such as This Is How We Do of Katy Perry,  Lip Gloss of Lil Mama, Sit Still, Look Pretty of Daya and featured in the music videos Love More by Carson Lueders.

Further, she was last seen in the official music video, Closer-New District featuring Jordyn Jones which has over 95k viewers till date.

Talking about Jordyn’s love life, she is in love relationship with her boyfriend, Brandon Westenberg, since 2016. Brandon is an American Musical.ly Star and a social media personality who has more than 370,000 fans following on his beyond Brandon musical.ly account.

This beautiful couple is deeply in love relationship and often share their romantic moment of cuddling, hugging, kissing on her official Instagram page.

After earning name and fame at the very early age of 17, Jordyn Jones lives a luxurious lifestyle with her family. Allocating information from several sources as of 2018, it is found out that her current estimated net worth is around $500,000 from her dancing and participating in different reality shows.

She is also social media sensational and has over 4.2 million viewers on her Instagram account. She is also paid a good sum of money featuring in different cover videos. She also owns few cars in her collection lists.