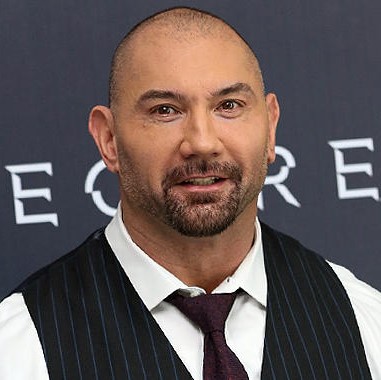 Dave Bautista is well known American actor, semi-retired professional wrestler, former mixed martial artist, and bodybuilder.  Dave is among the best professional wrestlers to ever get in the ring, he’s often underrated when it comes to all-time greats. He is also well-known for his role as Drax the Destroyer in the 2014 blockbuster movie, Guardians of the Galaxy.

In the beginning of his career, Bautista worked as Lifeguard before pursuing a career in bodybuilding. He started his professional career with the World Wrestling Federation/Entertainment(WWE). In the WWE Bautista was honored with several championships.

As well as Dave completed numerous tournaments of WWE. Along with this, Bautista also won the Tag Team Championship along with John Cena. After retired from the WWE, Dave Bautista started his Hollywood career from the 2006 movie, Relatives Strangers as Wrestler.

Besides, In 2006, Dave Bautista made his television debuted on the television series named, Smallville as Aldar. Thus, he got several opportunities for tv series such as Head Case(2009), Neighbours (2009), Chuck (2010) and much more. Currently, Bautista is busy with his upcoming movies, Avengers; Infinity War (2018).

In concern towards Dave’s personal life, he is married thrice and divorced twice till this date. Firstly, Dave married his long-term girlfriend, Glenda Fe Bautista after dating for a year on March 25, 1990. From their relationship, the couple is blessed with two children. They are daughters Keilani Bautista and Athena Bautista.

Sadly, Dave and his first wife Glenda separated on April 1, 1998. The lovely couple was married for eight years but due to some conflicts, they divorced.

Thus, Bautista remarried to his second wife, Angie Lewis on November 16, 1990. After spending six years together the couple divorced in 2006 without any children.

After then, Dave got married to his current wife Sarah Jade Bautista on October 7, 2015. Bautista has managed time for his spouse and has a great future planning of his married life. He and his third wife are happily living their married life and there are no rumors of the couple getting divorced.

Dave Bautista is one of the astonishing names in the world of wrestling. His estimated net worth is around $13 million US dollars. He has a height of six feet and six Inches. And besides, he has millions of fans on his Twitter and Instagram.