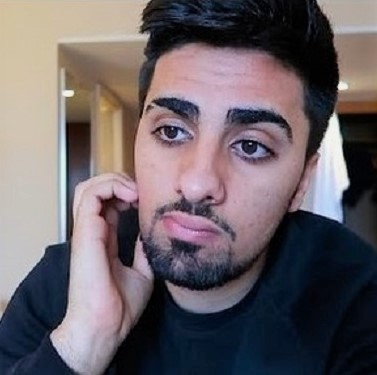 Mohamed Beiraghdary or as you now call him Mo Vlogs was born on 8 March 1995 in Dubai and later shifted to London to complete his schooling. His parents are Nadereh Samimi aka Naddia, and Esmail Beiraghdary. He has one sister named Parisa aka Lana. In London, Mo joined Queens Murray University for higher education but soon dropped out to focus on his YouTube career. His YouTube journey started in 2011 as a gamer. His gaming channels name was HitspecK0, where played Call of Duty Ghost and RuneScape on it while doing some commentary.

He regularly made face cam videos talking about himself hinting that he always wanted to be a vlogger. Later on December 7, 2014, he uploaded his first video on his now-famous youtube channel named Mo Vlogs. He was obviously cheerful and mesmerizing since the beginning and specifically filmed her sister’s Lamborghini and the luxury lifestyle that is unique to Dubai to bring some initial views.

Mo remain consistent and dedicated to his work and slowly gaining popularity and his hard work has now made him celebrity of the Middle East. His fans term by MO as the Yo-Yo squad have taken most YouTube channels to a subscriber count of almost 3.7 million subscribers and his Instagram account to 806k followers.

Mo lives with his mother and his sister in their Dubai House. His sisters Lana Ross is a painter. Mo is one of the most loved YouTubers, and his fans often send him some expensive gifts from all around the world to show how much they love him. His channel currently has around 870 million views which make his YouTube earnings close to 700 thousand US dollars. Earning big bucks is not what drives him, he started doing YouTube because he was passionate about it and it made him really happy.

Mo Vlogs has famously landed in YouTube as a Vlogger. Till date, he not revealed his exact net worth. However, some source claims that his net worth is estimated to be around $2 million.

Mo Vlogs is remarkably enthusiastic about cars; particularly high-end luxury and sports cars. He owns Ferrari 458 and a Ford Mustang.

Here are some of his social networking sites