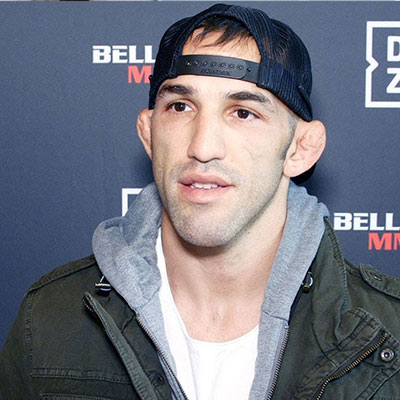 The former titleholder of The King of the Cage, Welterweight Champion, born Francisco Derek Campos is an American martial artist. He is known by the nickname of The Stallion. We can see Campos this season competing in Bellator’s lightweight division.

Derek is married to his longtime girlfriend, his wife is Elizabeth Boesch. The couple has a son together.

Campos was born in Lubbock, Texas, the United States on 1st April 1988. He grew up in Lubbock. During Derek’s high school time, he played football.

Derek Campos early career began as he was training himself in martial arts. In 2009, he used to do small fights and he also went to do few promotion matches too. He strictly fought for Louisiana and Texas-based promotions.

#Repost @janus_sports (@get_repost) ··· Flashback to Bellator 181 and this all out war to end an epic trilogy!! Derek Campos is an absolute animal! #DerekCampos #TeamCampos #Bellator #MMA #Warrior #JanusSports @campos155 @bellatormma

After Derek scored a win of 9-2 in his promotion matches he was signed in by the Bellator MMA.
In his debut match at the Bellator MAA, Campos faced his opponent, Rich Clementi on 25th May 2012. Campos lost his first match.

Then at Bellator 96, he was put up against, Brandon Girtz. Derek ended up winning the match by unanimous vote. He was applauded for his guillotine choke. About was scheduled against Martin Stapleton at Bellator 107, Derek won the fight.

Just a few exercises from this morning, focusing on back strength. Staying prepared for the next bout! ???? @bellatormma #riseandgrind #focused #alwaysready

A rematch was scheduled between him and his former opponent Brandon Gritz for the quarterfinal match of Bellator Lightweight Tournament on 21st March 2014, at Bellator 113. But his adversary was changed to Tim Welsh, Derek was announced as the victor in the match.

However, in the semi-final of the Lightweight Tournament, he faced Patricky Freire and lost to him. Campos lost the fight by TKO.

At Bellator 126, Derek won the fight in just 13 seconds. However on 19th June 138 he was put up against former Bellator Lightweight Champion, Michael Chandler. Campos lost the match.

Campos and Girtz were rematched against each other on 20th November 2015 at Bellator 146 which he lost.

Derek Campos’s recent match was a rematch between him and Patricky Freire on 16th February 2018. History repeated itself, Derek again lost the fight to Freire by TKO in round one.

Derek is married to his longtime girlfriend turned wife, Elizabeth Boesch. The couple has a son together, Riley Campos. Like to her husband, Elizabeth is also into fitness.

She and her husband seem to work out together. She also likes to cook healthy food. They both have a very healthy lifestyle.

Their son was suffering from some sort of illness or condition after his birth, but we are happy to report that he is in fine health now and enjoys time with his mom and dad.

Derek gets the salary of $19,200 USD per fight by the Bellator. Though his exact or speculative net worth has not been disclosed yet, the fighter, as announced by the California State Athletic Commission get a win bonus of $15,000 USD.

Shout out to @PowerhouseLBK for sponsoring @DC3Stallion at #Bellator161 @BellatorMMA

He is sponsored by the PowerhouseLBk. Derek is enjoying a modest lifestyle with his family as seen on his wife’s Instagram page.